The VM description states that IMF is a intelligence agency that you must hack to get all flags and ultimately root. The flags start off easy and get harder as you progress. Each flag contains a hint to the next flag.

Only port 80 is open, so let’s begin from there. 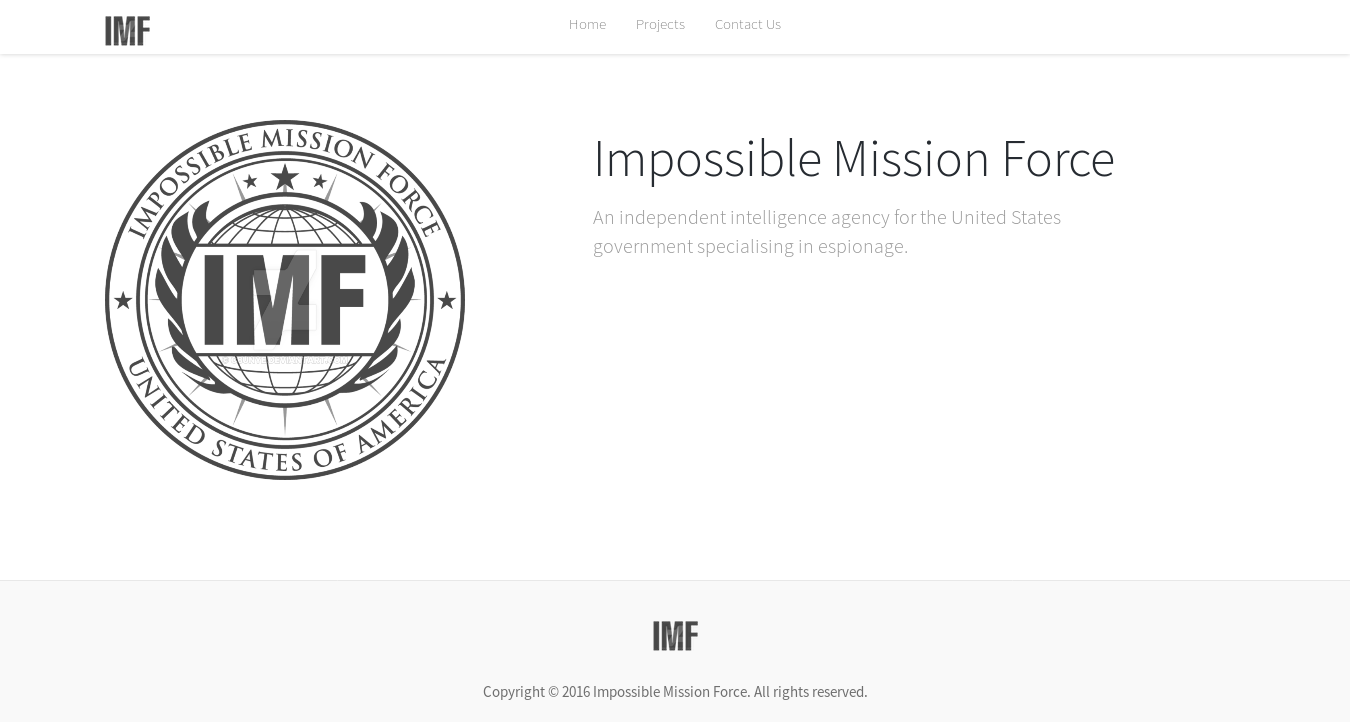 So we learn that IMF stands for Impossible Mission Force and that it’s a US intelligence agency. 3-letter agencies everywhere! 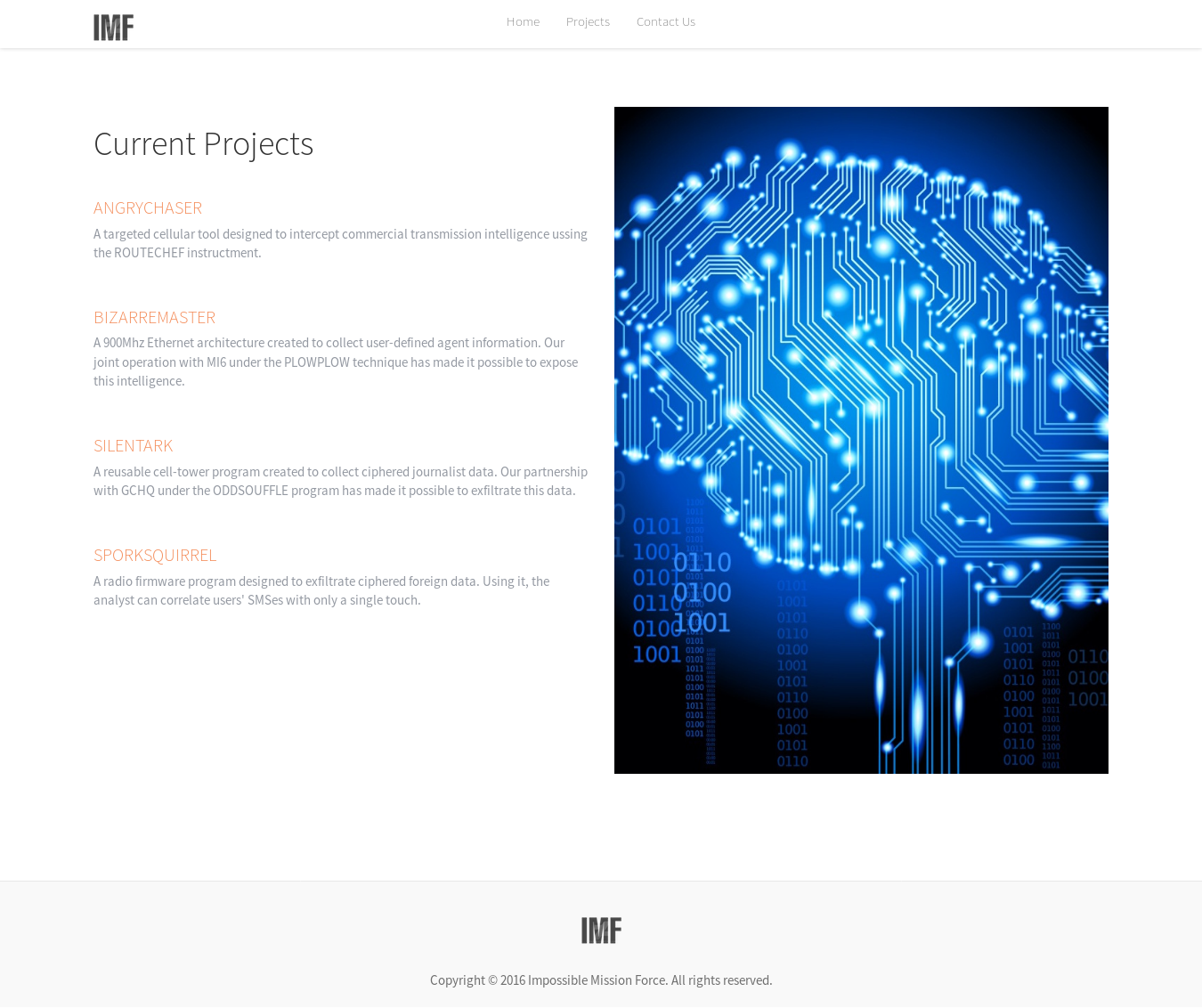 The Projects page makes for a fun read and it also reveals that the site is using PHP. 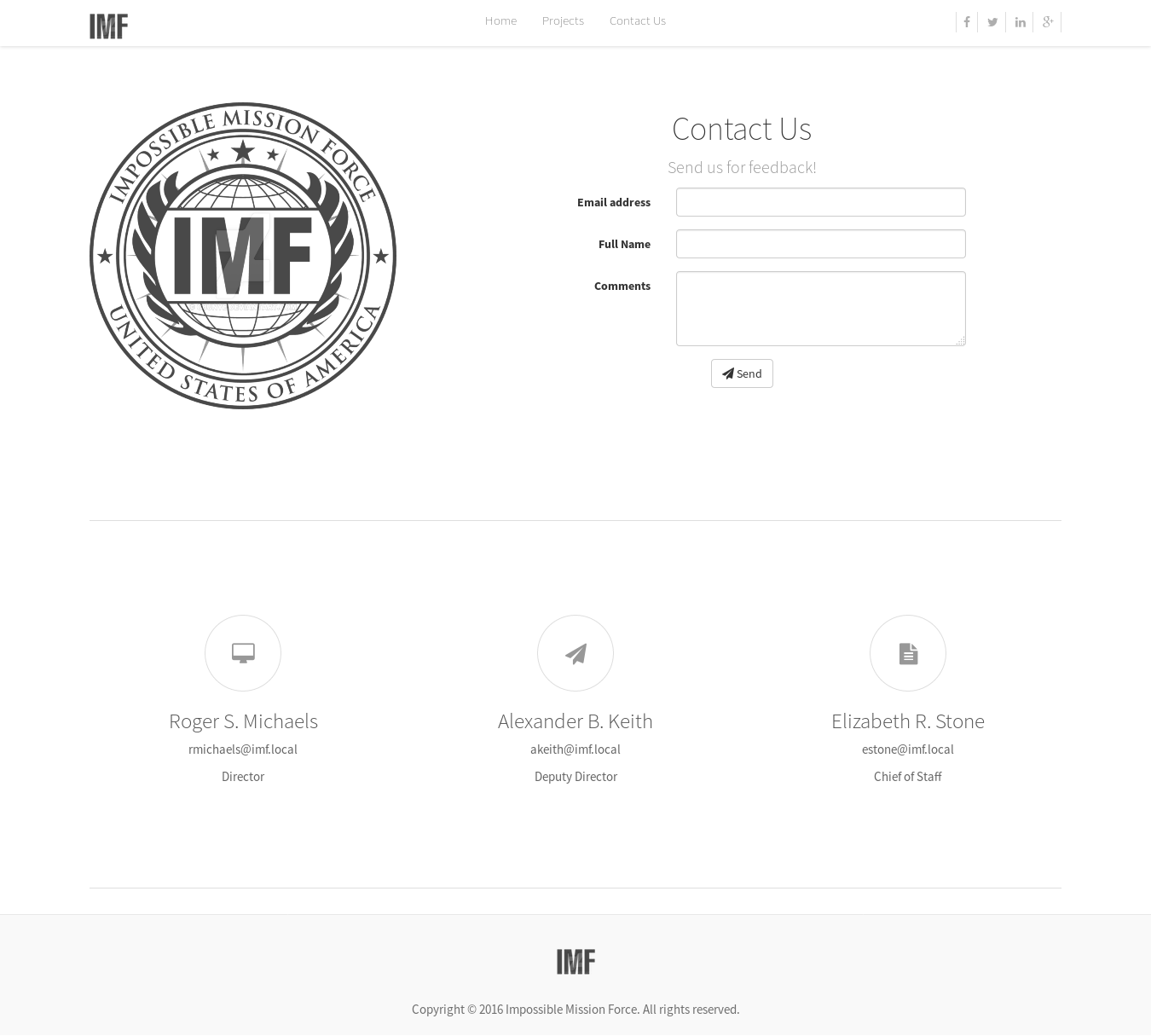 The contact page gives us some names and mail addresses:

The first flag can be found as a HTML comment in the source of the contact.php page:

Decoding the base64 flag gives the hint allthefiles.

I interpreted the hint to mean bruteforce, but I tried with multiple tools and wordlists and didn’t find anything. Going back through the HTML source, I noticed that several of the included Javascript files look like base64:

Putting them all together gives the string ZmxhZzJ7YVcxbVlXUnRhVzVwYzNSeVlYUnZjZz09fQ==, which yields the second flag when decoded: flag2{aW1mYWRtaW5pc3RyYXRvcg==}. This, in turn, gives the next hint: imfadministrator

With no other services available, everything revolves around the site. Using the above hint in the URL takes us to a hastily-made login page:

Ok, this added an interesting twist that exploits PHP functionality. Since the password is hardcoded, when attempting to log in we’d expect a string comparison to be made between the user input and the hardcoded password value. This is done in PHP through the use of the strcmp() function:

However, when reading through its manual page, there was a very interesting comment by chris at unix-ninja dot com:

If we build on this example, in case the login page was codded with an equals comparison, making the function fail may exhibit the same behavior as if the strings matched. And to do that, we’ll have to compare the hardcoded string with something that is not a string, like an array in this example. I used Burp to intercept the POST request that looks like this:

For the user, I used Roger’s username that we’ve discovered earlier. And then passed the password as an array:

And the login succeeded!

The decoded flag says continueTOcms. And that IMF CMS is a link to http://192.168.145.130/imfadministrator/cms.php?pagename=home

The Upload Report page is under construction. The Disavowed list is redacted:

In the URL, observe how the pages are constructed:

I tried inserting a single quote in the pagename parameter and sure enough, a SQL error!

The output was huge, so here I left only the relevant part:

The admin DB contains a table with the pages that we’ve seen in the CMS, but it looks like there’s an extra page we didn’t know about! Let’s see it!

I used an online barcode reader for the QR code which revealed the flag: flag4{dXBsb2Fkcjk0Mi5waHA=}. And the next hint is uploadr942.php

Attempting to directly upload a PHP shell fails with an invalid file extension message. Then I tried a GIF downloaded from the internet, but another error, that the file is too large. So I just created a makeshift file with the GIF89 magic number and uploaded it with no problems. There was no mention of where ig might be located, but in the source code of the page now appeared a HTML comment:

I tried putting that in the URL with a GIF extension, but that was a no-go. So I fired up dirb to see if there are any other directories under imfadministrator:

Awesome, it found and uploads directory. This time I appended the previous name to this new path and it found my GIF file. So the next thing was to repeat the process of a previous challenge and try uploading a PHP shell disguised as a GIF image. But today I decided to experiment with a different type of shell.

Weevely is a web shell designed for post-exploitation purposes that can be extended over the network at runtime.

Upload weevely PHP agent to a target web server to get remote shell access to it. It has more than 30 modules to assist administrative tasks, maintain access, provide situational awareness, elevate privileges, and spread into the target network.

SQL console pivoting on the target

HTTP/HTTPS proxy to browse through the target

The agent is a small, polymorphic PHP script hardly detected by AV and the communication protocol is obfuscated within HTTP requests.

First, I installed Weevely on my machine by cloning its git repository and installing the requirements:

Then I ran the Weevely client:

We need to generate the agent that we’ll actually upload to the target server:

I appended the GIF magic number at the beginning and changed the extension to GIF and successfully uploaded the shell. Then I connected to it with the Weevely client:

Now let’s use it to poke around:

Listing the files in the current directory gives us the fifth flag!

The decoded hint is agentservices

I ran a search on the filesystem for files with agent in their name and got 2 hits:

Interestingly, it seems there is an agent server around:

So it seems the agent service is listening on port 7788 and running as root:

Next I went to /usr/local/bin where the executable is located:

We need to give it a valid agent ID for authentication. Inside the folder there is also another file:

Looks like a port knocking sequence. I borrowed from an example on ArchLinux wiki

And when I ran Nmap again, I found port 7788 is now open to the public:

Connecting to it takes us to the agent prompt where we have to put the agent ID. I downloaded the agent executable on my system for GDB:

Running strings on it also gives some interesting infomation about extraction points. Anyway, back to the agent ID. In the strings I saw a call to strncmp, so when running the executable I set up a breakpoint on main, then ran the program, set a breakpoint to strncmp and gave it some input. Doing so, I noticed what appears to be a hardcoded value in the comparison:

Interesting. The 3rd option is the one that appears to take a variable amount of input, so maybe there’s a buffer overflow lurking around. It’s been a while since I’ve done any binary exploitation. First thing, creating the pattern that might crash the service:

I used the above string for the report and the program did crash:

With my binary exploitation skills unused in a long time, I had to revisit some topics and also take a look at how others solved this. Moving on, a couple of interesting things, EIP gets overwritten by Af6A, which appears at offset 168 of the payload:

However, if we look at EAX, we see our pattern from the beginning. Which means that if we had some shellcode instead of the pattern, it would get stored in EAX, and to execute it we would need a JMP or a CALL instruction to EAX. Luckily, there’s one available!

Now, for the shellcode part. The way of feeding it to the vulnerable program will be using a Python script. I chose a reverse TCP shell for the payload and avoided badchars like nulls and newlines (line feeds and carriage returns):

The payload size is 95 bytes:

Under these conditions, we would need to send a buffer of the shellcode + padding + the address of the CALL EAX instruction. Let’s see the Python:

And what remains is to execute it:

And on the listener, mission accomplished!

And the final decoded flag is Gh0stProt0c0ls! This was a really nice challenge in the later stages, especially from flag 3 onwards! Hats off to Geckom and the collaborators for this interesting VM!

As a recap, from only a web server available to root: