Today’s challenge is a boot2root with 11 flags to collect.

The Nmap scan took really long and found nothing:

Then I tried an UDP scan, but only got 1 hit:

I tried connecting to it with netcat, but other than a message, I didn’t find anything:

With nothing else to go with, I started sniffing the local traffic and looked if the Necromancer is sending anything across the network:

The machine is trying to establish TCP connections (SYN flag) to different IPs, on port 4444. So what happens if we listen on that port on our attacker machine?

We received a string! I used an online Base64 decoder to decipher this:

An MD5 hash..I decoded it and moved on.

In the previous message, we have a hint for the 2nd flag. Now we’ve decoded the 1st flag, so we need to send it..where? To its doom! Remember the UDP port 666 we discovered earlier:

The hint mentioned the number 80, so I used my browser to navigate to it and ended up in The Chasm. 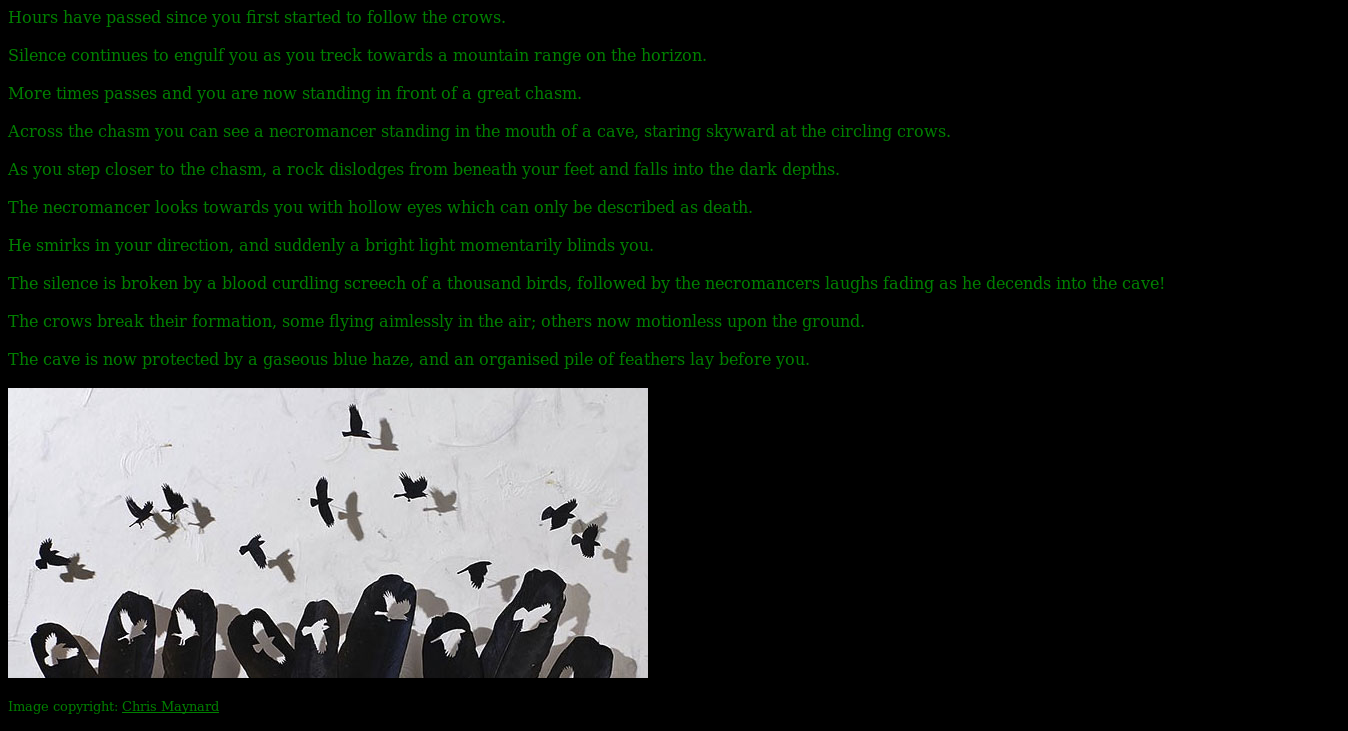 I’ve downloaded the image, pileoffeathers.jpg, and ran it through exiftool, with no discoveries. Then I ran strings on it and saw a couple of mentions about a file called feathers.txt. I thought that a text file must be hidden in the image. so I looked for ways to extract it. Kali comes pre-equipped with just the right tool:

The files were extracted in a directory called _pileoffeathers.jpg.extracted. Inside I found the feathers.txt file in a ZIP archive called 9082.zip.

Another Base64 string. Decoded it to find the flag and the hint:

On the web server, I went to the path of the above magic bridge, that leads to the cave: 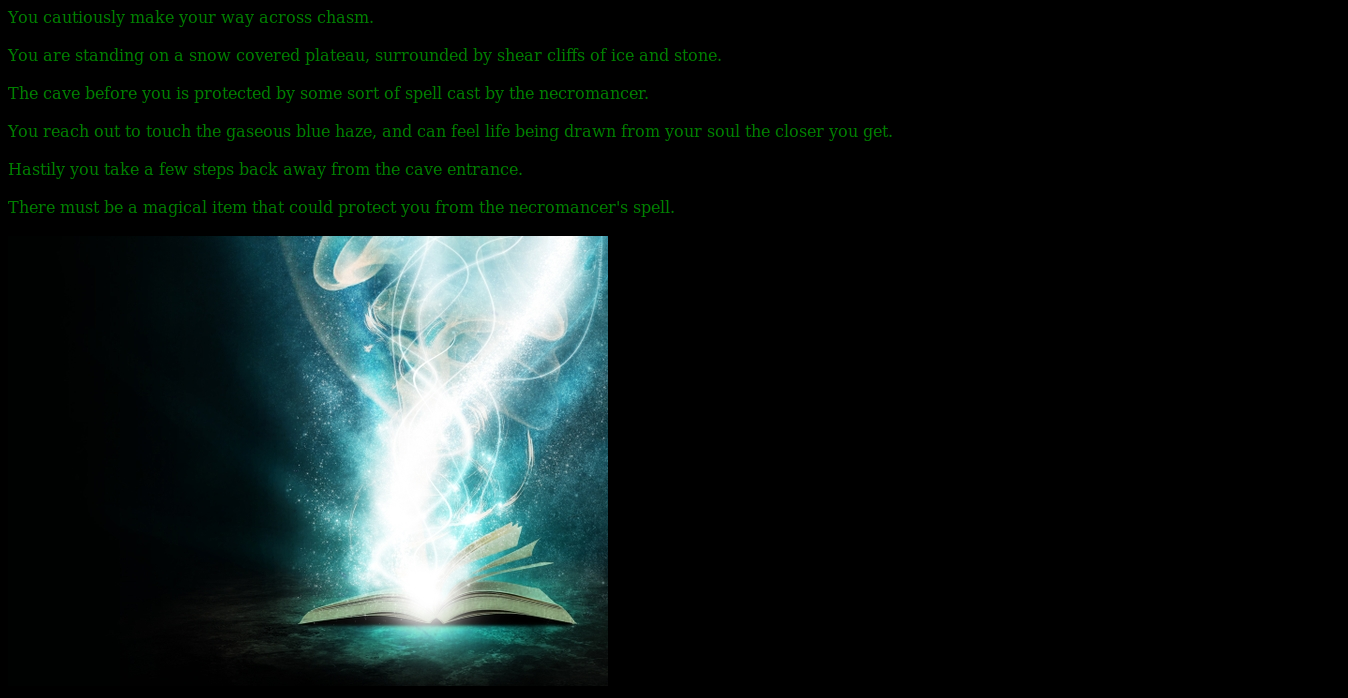 Another image, this time it’s a magicbook.jpg. But with all the usual tools I’ve tried, I couldn’t find any hidden information. I went back to the webpage and started bruteforcing for files and directories with different wordlists, and found nothing. Back to the drawing board..the hint is There must be a magical item that could protect you from the necromancer’s spell.. After looking on the interwebz for a bit, I went the route of building a custom dictionary of magical items to use with dirb. I used cewl to build a list from the words on https://dnd5e.info/magic-items/alphabetical-magic-item-list

The wordlist has over 9k entries:

Back to dirb, and this time it found something!

A talisman! Going to the path leads to a binary called talisman. But running it doesn’t produce the effect I’d hoped:

I fired up GDB, set a breakpoint on main and ran the executable again.

There is a wearTalisman function that is about to be called. Must be what we’ve seen when running the binary. I set up another breakpoint on this function and disassembled it, but I could see nothing interesting. Then I looked what other functions there might be in the binary:

A function named chantToBreakSpell sounds exactly like what we need! And it wasn’t called from main or wearTalisman. So I jumped directly to it:

So I tried a different method of sending the string by piping it to netcat and it worked:

Went to the new path and found the necromancer and a flag! 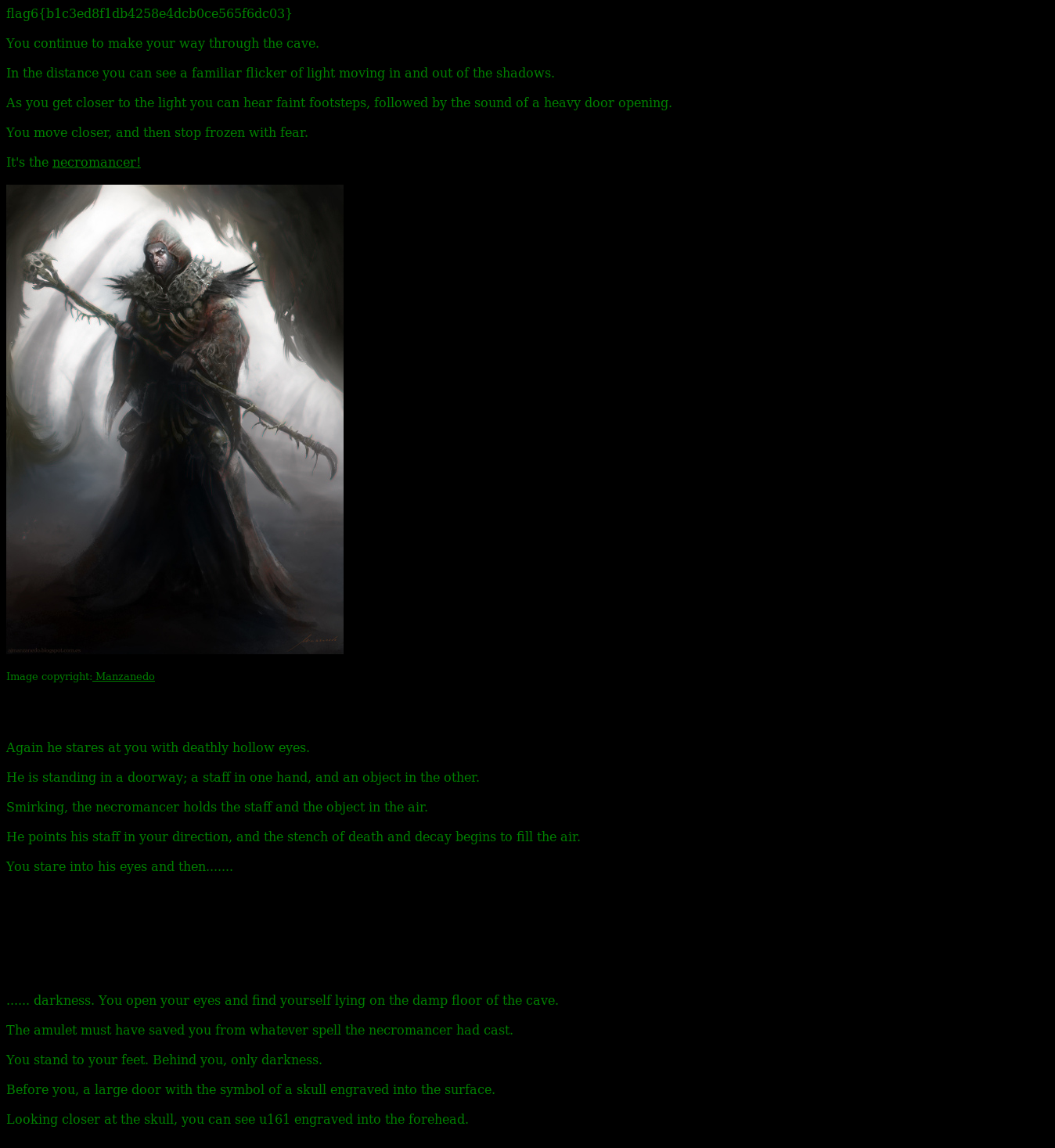 Flag #7 – Not your average SNMP walk

The necromancer link points to another binary, but when I tried to run it I got an error:

This file is not an executable:

From it I’ve extracted a packet capture file:

The file contains wireless traffic and references an SSID called community. It also captured deauthentication and association packets. If it captured a WPA handshake, we can try to crack it with aircrack-ng!

Boom! It didn’t take long at all. The key is death2all. What to do with it? The hint on the webpage mentioned u161, so we’re looking at SNMP next. I selected snmp-check for the job of enumerating SNMP:

snmp-check allows you to enumerate the SNMP devices and places the output in a very human readable friendly format. It could be useful for penetration testing or systems monitoring.

Used the cracked key as community string and got the following info:

Now it looks that we also have a read/write community string. But still not sure where to use it, so I turned to another SNMP utility, snmpwalk

The output is massive, but I only kept the relevant part. The important line is this one: iso.3.6.1.2.1.1.6.0 = STRING: “Locked – death2allrw!”. So if we could change it to Unlocked, maybe something would happen? The next tool coming into play is snmpset

snmpset is an SNMP application that uses the SNMP SET request to set information on a network entity. One or more object identifiers (OIDs) must be given as arguments on the command line. A type and a value to be set must accompany each object identifier.

With the door unlocked, we have the flag and next destination..SSH!

The SSH on the machine is accepting password logins, so it’s time for the bruteforce approach. I’ve used the combination of demonslayer as username and rockyou.txt as wordlist.

I’ve tried connecting to UDP 777, but nothing happened. So I tried next to connect to the local host from within the SSH shell. Netcat wasn’t installed, but nc was:

The battle is on! Seems we have to answer correctly, so I googled and found this on this Wikipedia page:

Great Ones, or Black Robes, are magicians on Kelewan who practice magic of the Greater Path.

Next quesch! I’m proud to say I didn’t need to google for this one :D

The legend of Faust is well-known to me, and since you’re reading this, I have to point you to 2 epic albums of Kamelot that are inspired by Faust: Epica and The Black Halo. You will thank me later.

Mephistopheles is also the demonlord of the 8th plane of hell in Neverwinter Nights: Hordes of the Underdark. Clearly I’m having a nostalgic moment here!

Back to Google for this one and found the answer here:

Hedge is a necromancer in service of Orannis, who supplies Nicholas Sayre (in mistake for Prince Sameth) as the latter’s avatar. He is roughly 100 years old. Motivated by an all-consuming desire for immortality, he believes that if he frees Orannis, he will become viceroy over the Dead; but fails when tricked into passing the Ninth Gate.

Immediately I thought of root privileges and looked at the sudo rights:

The necromancer is down! This was a really fun one, with a lot of challenge diversity and that text-based RPG feel and fantasy mentions! Thanks to xerubus for putting us face to face with the necromancer!