aircrack-ng is an 802.11 WEP and WPA/WPA2-PSK key cracking program. It can recover the WEP key once enough encrypted packets have been captured with airodump-ng. This part of the aircrack-ng suite determines the WEP key using two fundamental methods. The first method is via the PTW approach (Pyshkin, Tews, Weinmann). The main advantage of the PTW approach is that very few data packets are required to crack the WEP key. The second method is the FMS/KoreK method. The FMS/KoreK method incorporates various statistical attacks to discover the WEP key and uses these in combination with brute forcing.

Additionally, the program offers a dictionary method for determining the WEP key. For cracking WPA/WPA2 pre-shared keys, a wordlist (file or stdin) or an airolib-ng has to be used.

Bully is a new implementation of the WPS brute force attack, written in C. It is conceptually identical to other programs, in that it exploits the (now well known) design flaw in the WPS specification. It has several advantages over the original reaver code. These include fewer dependencies, improved memory and cpu performance, correct handling of endianness, and a more robust set of options. It runs on Linux, and was specifically developed to run on embedded Linux systems (OpenWrt, etc) regardless of architecture.

Bully provides several improvements in the detection and handling of anomalous scenarios. It has been tested against access points from numerous vendors, and with differing configurations, with much success.

Implementation of an offline dictionary attack against WPA/WPA2 networks using PSK-based authentication (e.g. WPA-Personal). Many enterprise networks deploy PSK-based authentication mechanisms for WPA/WPA2 since it is much easier than establishing the necessary RADIUS, supplicant and certificate authority architecture needed for WPA-Enterprise authentication. Cowpatty can implement an accelerated attack if a precomputed PMK file is available for the SSID that is being assessed.

EAP-MD5 is a legacy authentication mechanism that does not provide sufficient protection for user authentication credentials. Users who authenticate using EAP-MD5 subject themselves to an offline dictionary attack vulnerability. This tool reads from a live network interface in monitor-mode, or from a stored libpcap capture file, and extracts the portions of the EAP-MD5 authentication exchange. Once the challenge and response portions have been collected from this exchange, eapmd5pass will mount an offline dictionary attack against the user’s password.

Fern Wifi Cracker is a Wireless security auditing and attack software program written using the Python Programming Language and the Python Qt GUI library, the program is able to crack and recover WEP/WPA/WPS keys and also run other network based attacks on wireless or ethernet based networks. 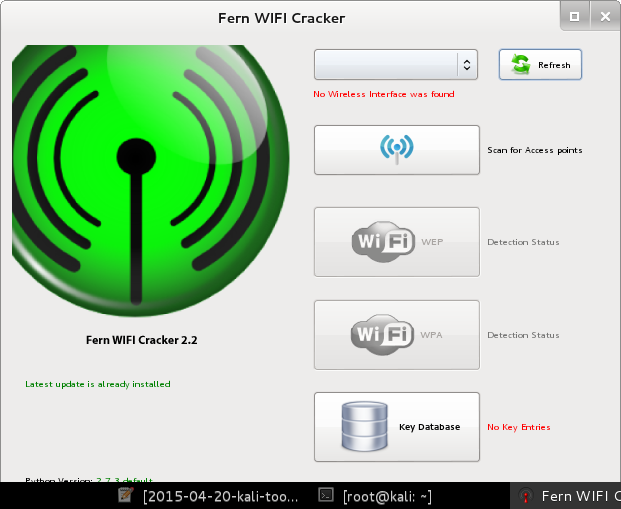 GISKismet is a wireless recon visualization tool to represent data gathered using Kismet in a flexible manner. GISKismet stores the information in a database so that the user can generate graphs using SQL. GISKismet currently uses SQLite for the database and GoogleEarth / KML files for graphing.

Kismet is an 802.11 layer2 wireless network detector, sniffer, and intrusion detection system. Kismet will work with any wireless card which supports raw monitoring (rfmon) mode, and (with appropriate hardware) can sniff 802.11b, 802.11a, 802.11g, and 802.11n traffic. Kismet also supports plugins which allow sniffing other media such as DECT.

Kismet supports logging to the wtapfile packet format (readable by tcpdump and ethereal) and saves detected network information as plaintext, CSV, and XML. kismet is capable of using any GPS supported by gpsd and logs and plots network data.

This script creates five monitor mode interfaces, four are used as APs and the fifth is used for airodump-ng. To make things easier, rather than having five windows all this is done in a screen session which allows you to switch between screens to see what is going on. All sessions are labelled so you know which is which.

Wifi injection based answering tool based on Wifitap

Wifitap is a proof of concept for communication over WiFi networks using traffic injection.

In particular, it’s a cheap method for arbitrary packets injection in 802.11 frames without specific library.

In addition, it will allow one to get rid of any limitation set at access point level, such as bypassing inter-client communications prevention systems (e.g. Cisco PSPF) or reaching multiple SSID handled by the same access point.

An automated wireless attack tool. To attack multiple WEP, WPA, and WPS encrypted networks in a row. This tool is customizable to be automated with only a few arguments. Wifite aims to be the “set it and forget it” wireless auditing tool.

Bluelog is a simple Bluetooth scanner that is designed to essentially do just one thing, log all the discoverable devices in the area. It is intended to be used as a site survey tool, identifying the number of possible Bluetooth targets there are in the surrounding environment.

BlueMaho is GUI-shell (interface) for suite of tools for testing security of bluetooth devices. It is freeware, opensource, written on python, uses wxPyhon. It can be used for testing BT-devices for known vulnerabilities and major thing to do – testing to find unknown vulns. Also it can form nice statistics. 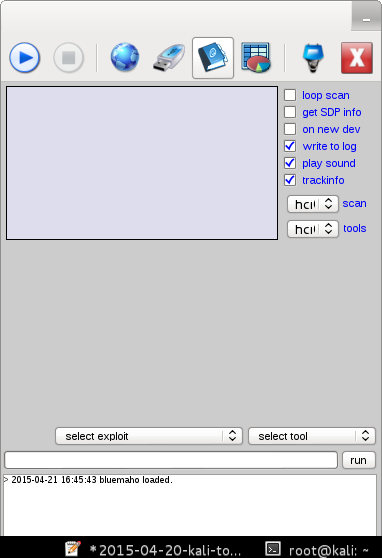 BlueRanger is a simple Bash script which uses Link Quality to locate Bluetooth device radios. It sends l2cap (Bluetooth) pings to create a connection between Bluetooth interfaces, since most devices allow pings without any authentication or authorization. The higher the link quality, the closer the device (in theory).

Use a Bluetooth Class 1 adapter for long range location detection. Switch to a Class 3 adapter for more precise short range locating. The recision and accuracy depend on the build quality of the Bluetooth adapter, interference, and response from the remote device. Fluctuations may occur even when neither device is in motion. 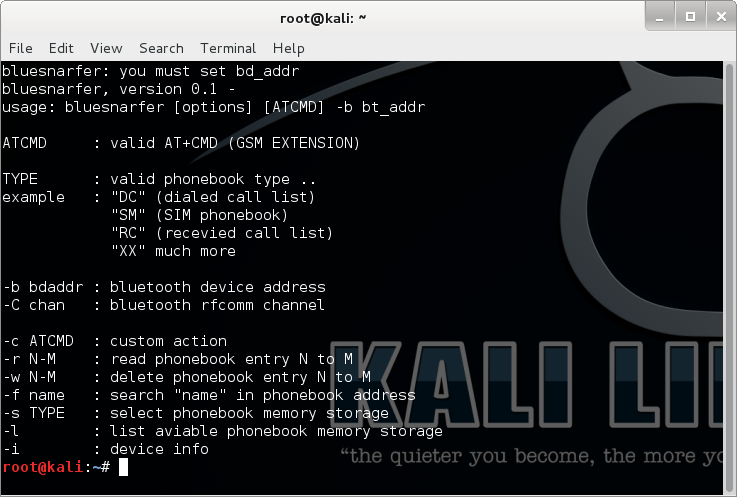 btscanner is a tool designed specifically to extract as much information as possible from a Bluetooth device without the requirement to pair. A detailed information screen extracts HCI and SDP information, and maintains an open connection to monitor the RSSI and link quality. btscanner is based on the BlueZ Bluetooth stack, which is included with recent Linux kernels, and the BlueZ toolset. btscanner also contains a complete listing of the IEEE OUI numbers and class lookup tables. Using the information gathered from these sources it is possible to make educated guesses as to the host device type.

RedFang is a small proof-of-concept application to find non discoverable Bluetooth devices. This is done by brute forcing the last six (6) bytes of the Bluetooth address of the device and doing a read_remote_name(). 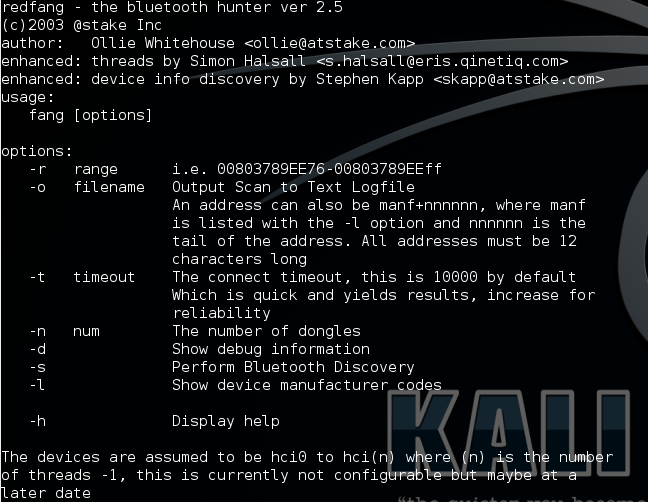 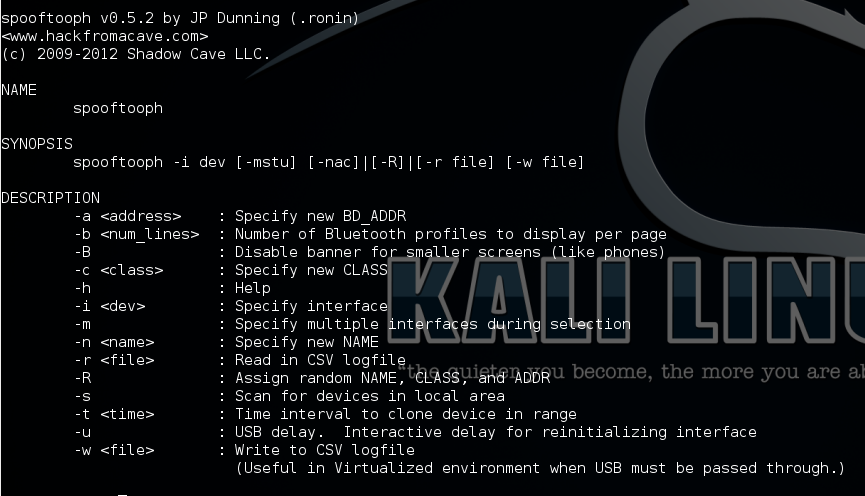 Transmit a flood of associate requests to a target network.

zbfind provides a GTK-based GUI to the user which displays the results of a zbstumbler-like functionality. zbfind sends beacon requests as it cycles through channels and listens for a response, adding the response to a table as well as displaying signal strength on a gauge widget. 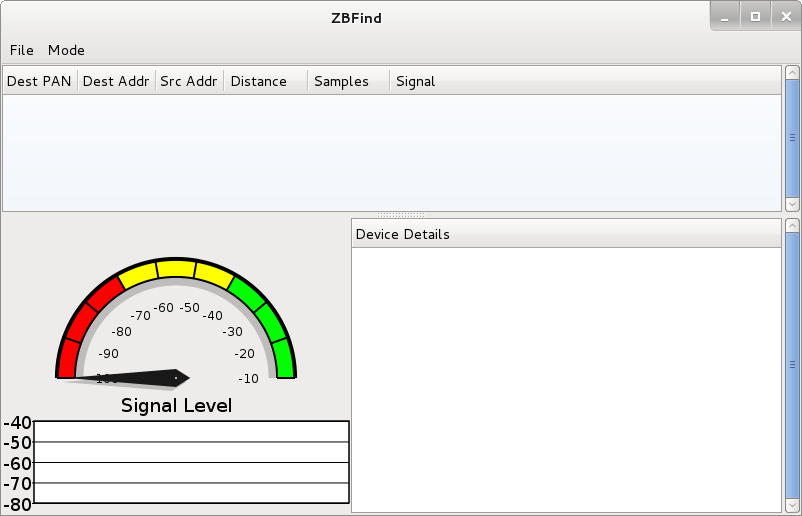 Search a binary file to identify the encryption key for a given SNA or libpcap IEEE 802.15.4 encrypted packet

Toolkit containing samples and various tools based on and around libnfc and crapto1, with emphasis on Mifare Classic NXP/Philips RFID cards. Special emphasis of the toolkit is on the following:

MFOC is an open source implementation of “offline nested” attack by Nethemba. This program allow to recover authentication keys from MIFARE Classic card. Please note MFOC is able to recover keys from target only if it have a known key: default one (hardcoded in MFOC) or custom one (user provided using command line).

A terminal interface for working with Mifare tags.

The program is used as an interactive shell to read and write Mifare tags using libnfc and a libnfc compatible reader or to simply manipulate Mifare data dumps from files.

nfc-list is a utility for listing any available tags like ISO14443-A, FeliCa, Jewel or ISO14443-B (according to the device capabilities). It may detect several tags at once thanks to a mechanism called anti-collision but all types of tags don’t support anti-collision and there is some physical limitation of the number of tags the reader can discover.

This tool displays all available information at selection time.

A collection of tools and libraries for exploring RFID technology, written in Python.

Script that tries to select the EMV Payment Systems Directory on all inserted cards.

Attempt to login to each sector with transport keys

Read all sectors from a LFX reader

Read all sectors from a mifare standard tag

Read all sectors from a mifare tag

Read all sectors from a Ultralight tag

Read all sectors from a standard tag

Read and then write all sectors from a LFX reader

Write all blocks on a mifare standard tag 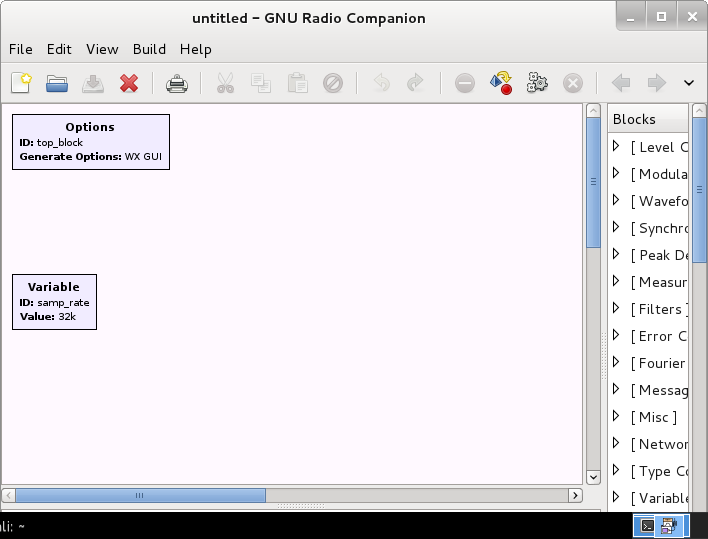 Gqrx is a software defined radio receiver powered by the GNU Radio SDR framework and the Qt graphical toolkit. Gqrx supports many of the SDR hardware available, including Funcube Dongles, rtl-sdr, HackRF and USRP devices.

Currently it works on Linux and Mac and supports the following devices:. Funcube Dongle Pro and Pro+ RTL2832U-based DVB-T dongles (rtlsdr via USB and TCP) OsmoSDR USRP HackRF Jawbreaker Nuand bladeRF any other device supported by the gr-osmosdr library

The latest stable version of Gqrx is 2.2, it is available for Linux, FreeBSD and Mac and it offers the following features: 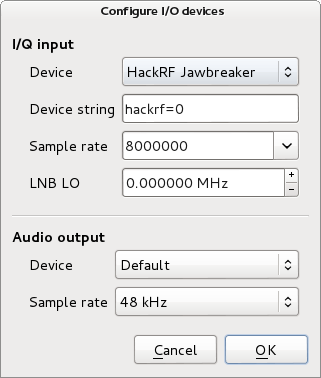 gr-scan is a program written in C++, and built upon GNU Radio, rtl-sdr, and the OsmoSDR Source Block. It is intended to scan a range of frequencies and print a list of discovered signals. It should work with any device that works with that block, including Realtek RTL2832U devices. This software was developed using a Compro U620F, which uses an E4000 tuner 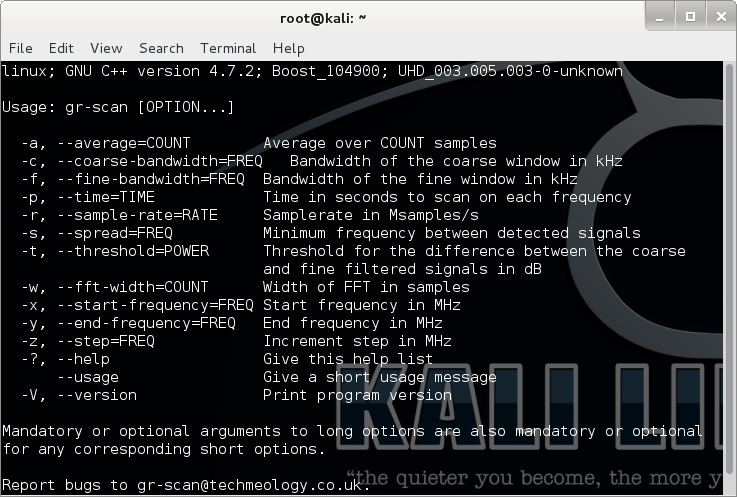 An I/Q recorder for RTL2832 based DVB-T receivers

A cross platform Python frequency scanning GUI for USB TV dongles, using the OsmoSDR rtl-sdr library. In other words a cheap, simple Spectrum Analyser. The scanner attempts to overcome the tuner’s frequency response by averaging scans from both the positive and negative frequency offets of the baseband data.

An I/Q spectrum server for RTL2832 based DVB-T receivers

A benchmark tool for RTL2832 based DVB-T receivers

Noise proves nothing. Often a hen who has merely laid an egg cackles as if she laid an asteroid.