Various commands for the LFCS Operation of Running Systems domain, which at the time of this post can be found at https://training.linuxfoundation.org/images/pdfs/LFCS_Domains_Competencies_V2.16.pdf 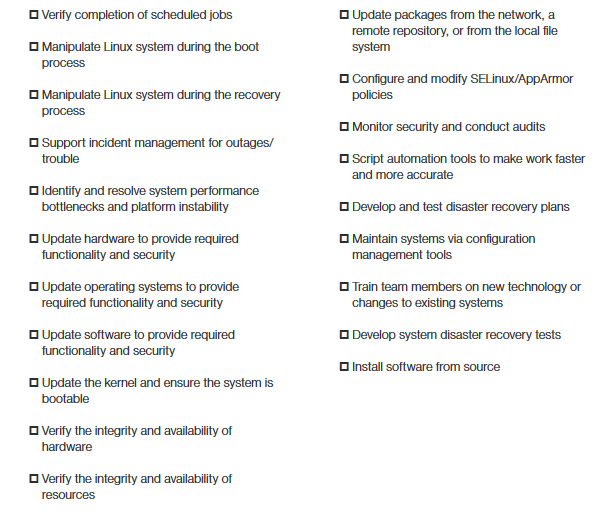 Crontab is the program used to install, remove or list the tables used to serve the cron(8) daemon. Each user can have their own crontab, and though these are files in /var/spool/, they are not intended to be edited directly

Unlike cron(8), it does not assume that the machine is running continuously.
Hence, it can be used on machines that are not running 24 hours a day to control regular jobs as daily, weekly, and monthly jobs

executes commands at a specified time

lists the user’s pending jobs, unless the user is the superuser; in that case, everybody’s jobs are listed.

In the usual case, ldd invokes the standard dynamic linker (see ld.so(8))
with the LD_TRACE_LOADED_OBJECTS environment variable set to 1, which causes the linker to display the library dependencies. Be aware, > however, that in some circumstances, some versions of ldd may attempt to obtain the dependency information by directly executing the program. Thus, you should never employ ldd on an untrusted executable, since this may result in the execution of arbitrary code. A safer alternative when dealing with untrusted executables is:

report CPU statistics and input/output statistics for devices and partitions.

display information about the CPU architecture

Tell how long the system has been running

report memory map of a process

Display amount of free and used memory in the system

delay for a specified amount of time

Resume each suspended job jobspec in the background, as if it had been started with &

Resume jobspec in the foreground, and make it the current job

Default is the TERM signal, which is similar to asking nicely to terminate. The more forcefull option is KILL(9)

look up or signal processes based on name and other attributes

report a snapshot of the current processes

display a tree of processes

If a runlevel cannot be determined, N is printed instead

Last searches back through the file /var/log/wtmp (or the file designated by the f flag) and displays a list of all users logged in (and out) since that file was created.

shows a log of the file /var/log/btmp, which contains all the bad login attempts