It’s time to slay the second troll in the Tr0ll series!

First, a bit of enumeration:

You know the drill! Something awaits us on that web server! 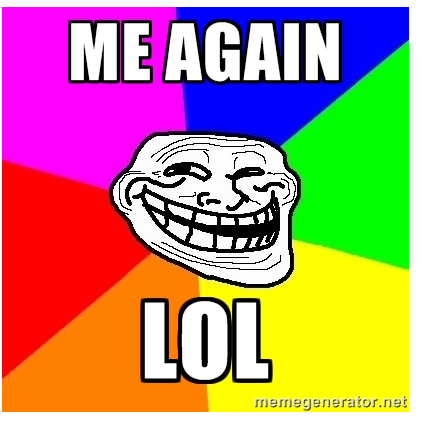 I downloaded the image and ran it through exiftool, but found nothing. Next I looked if there’s a robots.txt file, and there was..but, oh, the horror:

Ok, let’s look (sigh). I went through them and only hit on a bunch of 404s and this image in a couple of directories: 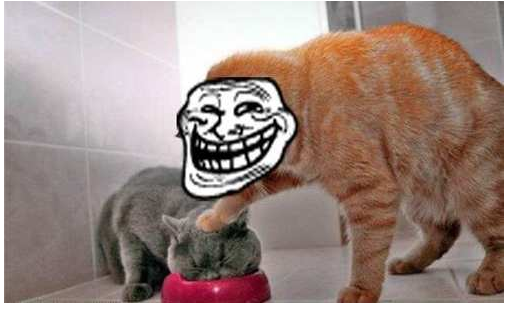 Exiftool again..and nothing again..Also tried cat_the_troll as a directory name, nothing there either. A little bit anticlimactic, but remembering the HTML comment of a Tr0ll author, what worked was logging into the FTP server with the credentials of Tr0ll/Tr0ll:

After downloading the archive, I tried extracting it, but of course there’s a password. Tried a couple of guesses, nothing worked. Lastly, I tried SSH with the same credentials, and although it worked, the session ended instantly.

Back to the web, I decided to download all the cat troll images, since they were in different directories, and might be different themselves:

I set the names to reflect the directories where I got them from. It seems one of them is bigger than the rest. Nothing from exiftool, this time I just tried strings and at the end of the output was this line:

Finally, getting somewhere. The hint is probably a directory name on the web server, so I went there and did find an answer.txt file. Unfortunately, it was full of what looked like Base64 strings, and massive:

I decoded it with the command: base64 -d answer.txt > decoded.txt, but how to figure the answer in all this sea of trolling? I remembered the troll’s fixation on using underscores, so I tried doing a recursive grep for that:

That didn’t work as a password. Next I looked for longest line:

According to this command, the longest line’s length is 30. I whipped up a quick Python script to find all lines with the length of 30:

Ran it and BOOM:

This sounds exactly like the troll! Now I was finally able to extract the archive:

I tried SSH’ing as noob this time:

Well, that didn’t help much. I tried appending commands, but I still got kicked out instantly without running anything. After a bit of head scratching and Google, I got reminded that SSH can be vulnerable to Shellshock, if it meets certain requirements, which are: an unpatched bash (doh), authentication using authorization_keys, and the user in question being restricted in the commands they could run. As it so happens, we have an old machine that may not be patched, key-based authentication, and it makes sense that a user called noob would be restricted!

First, a recap. The Shellshock string is () { :; };, and if followed by a command, that command gets executed. I tried it and:

Excellent! The previous -t flag of the SSH command is useful when you want to run interactive applications on the remote server. Now let’s see if we can spawn a shell:

Finally, we’re in! Before continuing though, I thought it would be helpful to better understand how Shellshock works.

Because Bash is a scripting language, you can do things like defining functions:

And then you call it:

You can also export functions to environment variables, so they can be run by new bash instances:

Now the function definition is inside the environment variable, and it can be evaluated:

This is intended behavior so far, but there is a vulnerability in which the evaluation continues even after the function end.

Here you can see the vulnerability: the second echo statement was outside the function definition, but it was executed anyway.

Next, the attack fools the shell into accepting a bogus function definition. You can use this string to see if your bash is vulnerable to Shellshock: x=‘() { :;}; echo VULNERABLE’ bash -c :.

Now we know that what looked like gibberish before, is actually the syntax for defining functions. With a diference of a colon instead of a function statement. The : is a []shell built-in(https://security.stackexchange.com/questions/68168/is-there-a-short-command-to-test-if-my-server-is-secure-against-the-shellshock-b) that does nothing. So, to the vulnerable shell, the function definition doesn’t perform any action, and is then followed by an arbitrary command, that is happily executed: () { :;}; CODE.

Ok, back to the Tr0ll! To also confirm the SSH vulnerability, look in authorized_keys:

There it is, the trolling message was the command that user noob was restricted to. Ok, let’s move on and see how we can get root. I searched for some kernel exploits, but could only find some potential exploits for 64 bit systems, and this one is 32 bit. But then:

Didn’t expect to get anything out of this, but..trolls..

I expanded the list of files in these directories so I could see everything at a glance. Let’s see what we have:

This appears to echo whatever you give it. I tried doing a strings on it but got permission denied error. Moved on to the next executable for now:

Ok..the troll is trying to annoy us..this binary rebooted the machine. I went on to the third and again it restarted! Not much likely for the binaries to be the same, and it was good that I had the initial picture of the binary sizes! It seems the trolling continues..by switching the binaries between directories! Keep in mind the binary sizes, and check often, because they get moved a lot.

Wasn’t sure what this one did, until I got a permission denied when running ls :–) so in those 2 minutes, we are probably stripped by even the basic permissions. By now, it seemed that the only interesting binary would be the one that takes user input (largest one), so I got back to it. I used pattern_create.rb to build a 500 bytes long string and feed it to the binary, and it segfaulted! So, we have a buffer overflow here!

Let’s see where exactly in the pattern it happens:

Taking a closer look at the registers and stack:

ESP has been overwritten with part of our string, so we can craft some shellcode and jump to the address of ESP to execute it. I picked the Linux x86 execve /bin/sh shellcode, which is 19 bytes long.

What we have now for a functional exploit:

Ran the exploit in GDB:

Remember that a shell which you get in GDB has the privileges that GDB runs at, so this is not a real root shell. We have to run it outside GDB. I did so and I got a big..segmentation fault! What worked in GDB didn’t work outside it, and as I was getting frustrated, I looked at other writeups, to see if anyone else had the same problem. It seems it should have run smoothly, but there can be a discrepancy in memory between a live environment and a GDB one. I tweaked the ESP address a few times, before hitting the right one:

The valid ESP address was 0xbffffb90. If you try it in GDB though, you will get a segfault there. Ah, this challenge trolled me on so many levels!