In this post I am going to focus on the use of Metasploit.

Before starting, I want to leave here some links to good resources for learning Metasploit:

The msfconsole (Metasploit Framework Console) is where you will be spending most of your time when working with Metasploit. You can do almost everything from here, but the amount of commands might seem overwhelming at first. 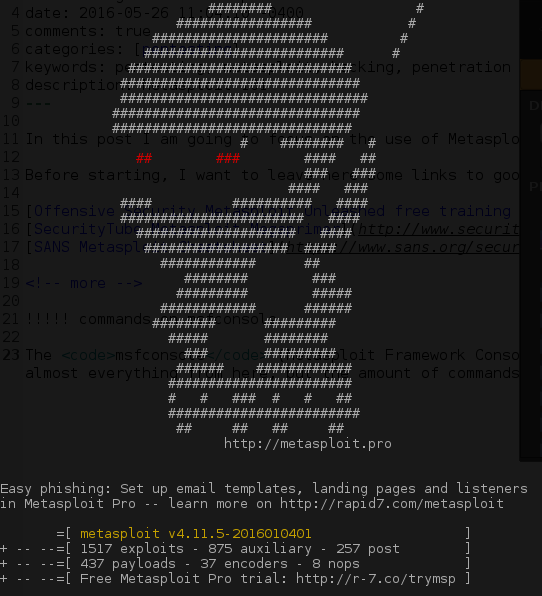 Besides the Metasploit functionality, you can run external commands in the console, which is really helpful.

The first thing you probably want to do is look at the help menu:

Every time you enter a new context, you can use help to see the options available for that context. For instance, after selecting an exploit:

Or after setting a payload:

Many commands also have their own help menu that you can access by typing help cmd or by passing the -h switch: cmd -h. Let’s now glance over some core commands

In the following example I am upgrading the shell of a session to Meterpreter:

The options that we need to edit when setting up exploits:

A couple of payloads:

For the evasion options available for each module, you can use the command show evasion:

Metasploit automatically selects the best encoder for the job given the selected criteria. If you want to use a specific encoder, you can select one from the multitude available:

There are 3 types of payloads that you can use with your exploits.

The following are the available options for generating payloads:

Working with the database

Metasploit is backed by a powerful database that you can use to organize and classify the information. First, you have to start the PostgreSQL server: service postgresql start. Then you create and initialize the database after starting Metasploit with the msfdb init command.

Let’s look at the database commands:

Chances are, you will want to keep your targets organized and separate from each other. For this, you can build different workspaces for every one:

Let’s say that you want a separate workspace for your lab target. You can add it and all the subsequent information will be saved in this workspace:

Now let’s populate this workspace with some information about the target. I ran a db_nmap scan on the box and then I looked at the hosts data:

There is more that you can do with the hosts command:

With the services command, you can look at the identified services:

You can also look at the vulnerabilities associated with different services:

If credentials were found, we have a way to list and manage them:

As you can see though, I have no credentials in the database:

Finally, there is the loot:

I have compromised the target via the Samba service and now I will loot some hashes from it:

Now I can see the loot in the database:

Next, let’s look at Meterpreter, the king of payloads. Meterpreter has no disk presence because it only exists in memory, and it leaves no trail behind of created processes because it injects itself in currently running processes. To top it off, its traffic is encrypted. I will show Meterpreter in action here, but this time, the target is a Windows 7 machine.

I’ve already set up the exploit:

And the description of what this exploit does:

All right, first I start the handler on my attacking machine:

I actually closed IE on the Windows machine because it kept requesting the DLL and opening more sessions. Now it’s time to go to the newly created Meterpreter session:

The reason I wanted to show Meterpreter on a Windows target is because there are many commands unique to Windows that we can use. I will demo them further

The first thing I will do is migrate to the Windows Explorer process, because a stray Notepad might look suspicious. I got the PID from doing a ps:

So let’s now play with the available functionality. I made a file that I will upload to the hacked machine:

Ok, now I will download something on my machine:

I attempted to get system privileges and it worked:

It’s possible to clear the event log of the machine, though that is anything but stealthy:

We can also execute native commands on the target:

If you’re feeling brave, you can mess around, uhm, interact with the target registry:

To leverage more Windows-specific functionality, you can choose to spawn a system shell and do your work from there:

We can interact with various components of the Windows GUI. First, let’s enumerate the available desktops and get the current one:

See how long the user has been idle:

If you want to know what the user is up to, you can start a keylogger and quietly observe everything like a ghost in the machine:

I typed something on the hacked machine and now I’m going to dump the keystrokes and see what we’ve got:

Now I want to see what the user sees. So let’s take a screenshot:

In case you want to annoy the user, you can mess with some of the user interface:

I can’t demo the webcam and mic commands now so I won’t go into those, but you have them at your disposal if the target has a webcam or microphone

Once you have a foothold on the system, there are more things that you can do to assist you in squeezing more juice out of the hacked machine

You can use hashdump to dump the local hashes:

It is possible to also get the hashes and credentials straight from memory by using Mimikatz:

We can now use the psexec module to pass the hash and get access on the box, without any cracking. Note that on my Windows lab machine, I had to go to Local Security Policy –> Local Policies –> Security Options –> Accounts: Limit local account use of blank passwords to console logon only and set it to disabled.

We owned an administrator account. But we want even more privileges. We can use the incognito module to steal the SYSTEM token for ourselves:

Let’s see what tokens are available:

We are interested in the delegation tokens that are created by interactive logins. And among them..the SYSTEM token that we want!

Another way we can get access to the system is via Remote Desktop:

Let’s use it to enable Remote Desktop on the target and add our own user:

And to check if it worked, we can use the rdesktop client like this: 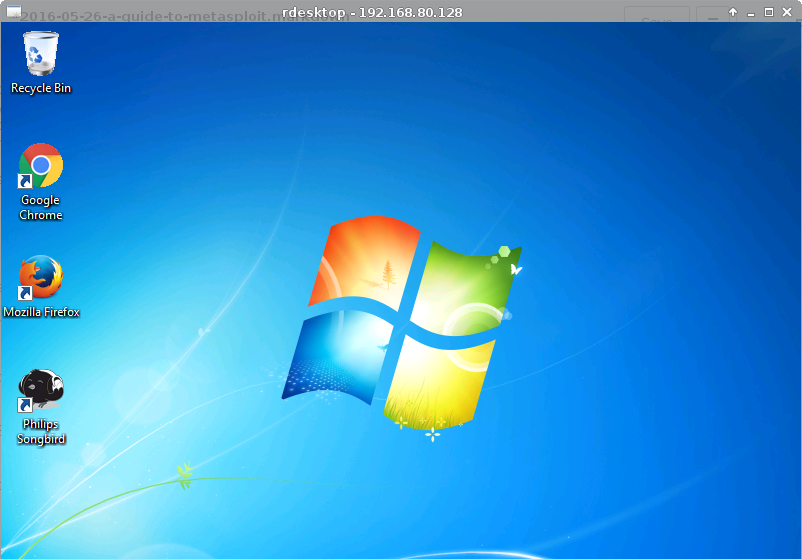 However, this is not very stealthy, because if another user is logged in, they will be disconnected. Anyway, better clean up after ourselves when we’re done:

Despite the error above, the user was removed from the logon session. However, some files of that user remained behind and I had to manually delete them

Further on, we can enable a packet sniffer on the target to gather more sensitive information:

First, we must learn what network interfaces are available:

Now we can start sniffing:

We can then dump the packets to a file and see if we’ve got anything interesting:

If you left traces on the filesystem, you can modify or erase file attributes to conceal your footprints:

If you want to maintain your presence on the target system, Metasploit has two types of backdoors that can be installed as a service on the target. However, keep in mind that they don’t have any authentication, so best not leave them around on computers outside a lab environment – you don’t want to open the door for everyone else in the world.

Unfortunately, I couldn’t connect to it because I got a bunch of SSL errors and I couldn’t find any workaround.

The Persistence script has more options:

First, we set our listener:

Then on the target machine we install the backdoor and it connects back to us!

When done, don’t forget the cleanup:

For us Python coders out there, Meterpreter has a nice Python extension that can allow us to run Python code without it being installed on the target machine

First you have to add a site:

Then you specify the added site as a target:

Before scanning you might want to take a look at the enabled modules:

And finally, you can see which modules are enabled for your target:

I started the scan with wmap_run -e (not showing the output due to size). After it finished, I checked if any interesting vulnerabilities were uncovered:

Only a bunch of directories discovered but you don’t know what you can find without looking.

With Msfvenom, you can not only generate shellcode, but also create executables from whichever payload you want to use.

Let’s say we want to use a reverse shell executable. First, let’s look at the payload options:

Now we know what options we need for creating an executable. I already have the LHOST and LPORT set, but will pass them anyway for demo purposes:

Inside Metasploit, we have to launch the generic payload handler. This module is a stub that provides all of the features of the Metasploit payload system to exploits that have been launched outside of the framework.. Don’t forget to set the options and the payload to match the one you put in the executable:

Now run the exploit on your machine. All you need to do now is to transfer your executable to the victim machine and run it there to receive your shell:

Success! This demo was pretty straightforward, but if executables attract too much attention on the target, you can try to sneak your payload into PDFs or Word documents instead.

This was a long post, but I wanted to showcase many of Metasploit’s capabilities. It was a fun lab, but I barely scratched the surface of what’s possible.