Next in my lab series will be another machine from VulnHub:

Tr0ll was inspired by the constant trolling of the machines within the OSCP labs.

The goal is simple, gain root and get Proof.txt from the /root directory.

Not for the easily frustrated! Fair warning, there be trolls ahead!

As always, I start with a guns blazing Nmap scan:

Not an awful lot to start with. First thing, I checked what’s being served on port 80, and of course, there was a troll: 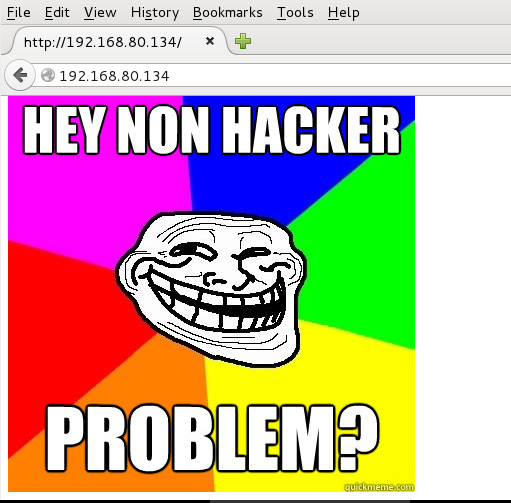 The “secret” doesn’t help much either, other than potentially hinting at the use of steganography, which I am very bad at. 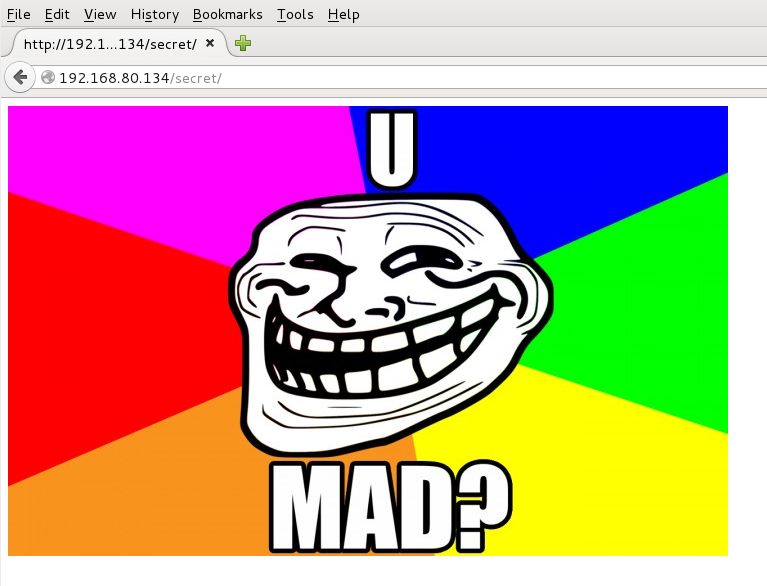 I also searched for a vsftpd exploit suitable to the 3.0.2 version, which I couldn’t find. So before trying to search for hidden data that might not even exist inside the images, and even if it does, I wouldn’t be able to find it anyway, I’m going to see if there is anything interesting lying around the FTP server.

Logging in with the anonymous/anonymous credentials, I see there is a pcap file waiting:

I downloaded it to my machine so I can check it out with Wireshark:

Scanning through the packets I noticed something interesting:

And when following the stream, even more interesting tidbits: 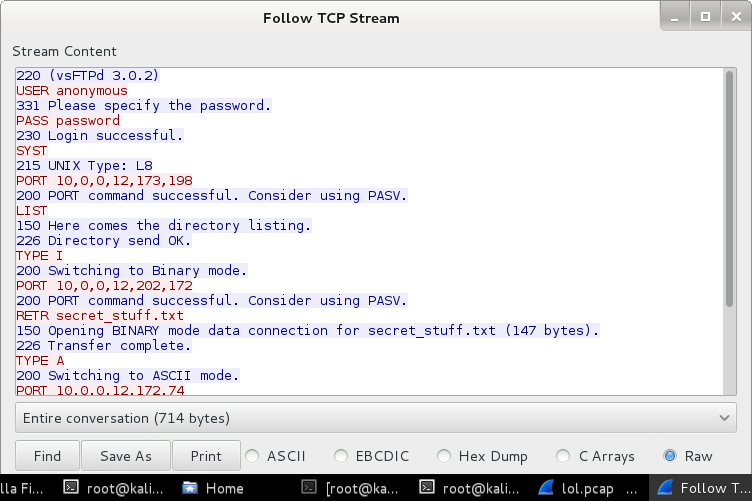 So why don’t we see the secret stuff for ourselves! In order to see what’s inside the secret file, I looked at the FTP-DATA packet that comes after requesting the transfer. I highlighted it below and you can see it’s the correct size (147 bytes):

If you follow the stream you will see this:

Finally, some progress! As an aside, this information could also be obtained just by running strings on the pcap file. Now let’s go back to the browser and see what’s inside that directory. To keep up with the troll theme, there’s a BIN file named roflmao. Again I felt a little discouraged because I have only a rudimentary grasp of binary analysis and reverse engineering at the moment. Running strings on it, the only interesting thing I noticed was this line:

If you run it (make it executable or you will get a permission denied error), you will see that it only prints the above line and exits. Time for GDB!

I looked around as much as I could, but the program is a really small one and I could find nothing hidden. Also the address didn’t seem to fit in with any of the memory addresses inside the binary, so I thought maybe it’s just a hint for continuing elsewhere. The only place that came to mind was to try for another hidden directory on the web server: 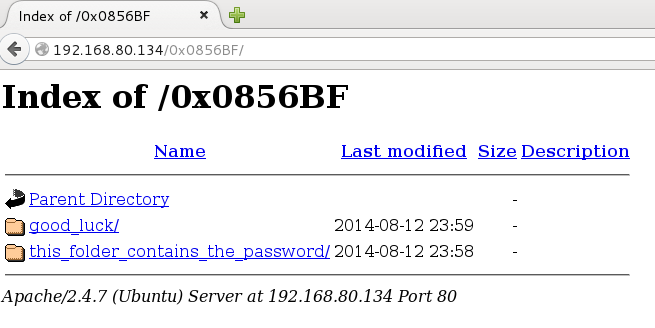 Woohoo! We’re on the right track. Now it seems both directories contain a text file with..users and a password?

I tried connecting to SSH using the password in the Pass.txt files and usernames from the other file. Then I also tried to connect as root, troll, tr0ll, using everything in the lists as password. Manually.. Anyway, when nothing worked, I had to take a break and think that it’s most likely trolling me, as it did in all the previous steps. So, looking at the directory index, it’s apparent that one folder contains the password and the other one a list with potential usernames, from which you have to find the correct one to go with the password. But since I’ve already tried that and failed, I didn’t know what else to do. Now, the Pass.txt file contained a good job message that seemed to be the actual password, but maybe it was just a normal good job..implying that I already found the password. So I tried SSH again, this time using Pass as password..and when that didn’t work, even which_one_lol. This was more wasted effort, so lastly, I literally used the name of the file as password: Pass.txt. And! Combining it with the overflow user…success!! Now I started looking around, but before I could find anything, I’ve been booted by the shell?!

After more logins, it appears the shell is killed every few minutes. So, this troll might be playing with cron. The only other lead I had so far was a file named lmao.py in the /opt/, but I didn’t have permission to read it. I took a look in the /var/log directory:

So, that cleaner.py file seems to be a likely culprit. I searched for it and I found something interesting:

Ok, so this cleaner deletes all the contents of the /tmp/ folder. The great part about it though, is the wonderful permissions it has:

So we can modify it to help in compromising the system. First thing I did was add the following code to copy the contents of the /etc/shadow file to a txt file in the /tmp/ folder:

Now we have the password hashes and we could crack them if we wanted:

But I am not a fan of cracking passwords, if it can be avoided. And in this case, we still have the other Python file to check. So I modified the cleaner code again:

And after a little bit of waiting, we finally have the culprit that is killing our shells:

Ok, now let’s finish by getting a shell. We can leverage the cleaner file to copy the shell executable and give it outrageously lax permissions and SUID bit. Note that I’m not saying bash, because the shell being used here is the sh shell.

Here is the simple code for copying the shell file to /tmp/ and letting everyone run it with root permissions:

Now just wait for cron. Check the loot and pwn the troll!

Alternatively, since the original objective was only to read the proof file, you can just use the cleaner file to do it, providing you know the name of the proof file:

And here it is:

He that breaks a thing to find out what it is has left the path of wisdom. — J.R.R. Tolkien

Been busy and inactive for a couple of months, but I am back now and hopefully without such long pauses between posts.