For this box, you have to find 8 flags, each containing an MD5 hash.

Starting with the web server, the web page is the homepage of the SkyDog con. Poking through the source, I found a suspicious comment:

Going to the above mentioned JS file, on the first line we find a hex string:

I already ran Nmap and saw that SSH is listening on port 22222. Trying to SSH as frank gives the next flag:

The decoded hint is encrypt

Flag #3 Be Careful Agent, Frank Has Been Known to Intercept Traffic Our Traffic.

Remember that Nmap found also port 443 open, so I switched to https to check it out and was greeted by a self-signed certificate. Viewing the certificate gives the third flag: flag3{f82366a9ddc064585d54e3f78bde3221}

And the next hint is personnel

Flag #4 A Good Agent is Hard to Find.

I tried navigating to /personnel on the web server and it gave me the following message:

So we need a specific user agent. Remembering the included JS file of the first flag, that hinted towards an old Internet Explorer version, I revisited it and searched for the string fbi inside it and found the lines:

So FBI agents use IE4 on their workstations. Cool, nothing catastrophically wrong there. I grabbed an IE4 user agent from http://www.useragentstring.com/pages/useragentstring.php?name=Internet+Explorer, changed my User Agent to User-Agent: Mozilla/4.0 WebTV/2.6 (compatible; MSIE 4.0), and went straight to the FBI portal! 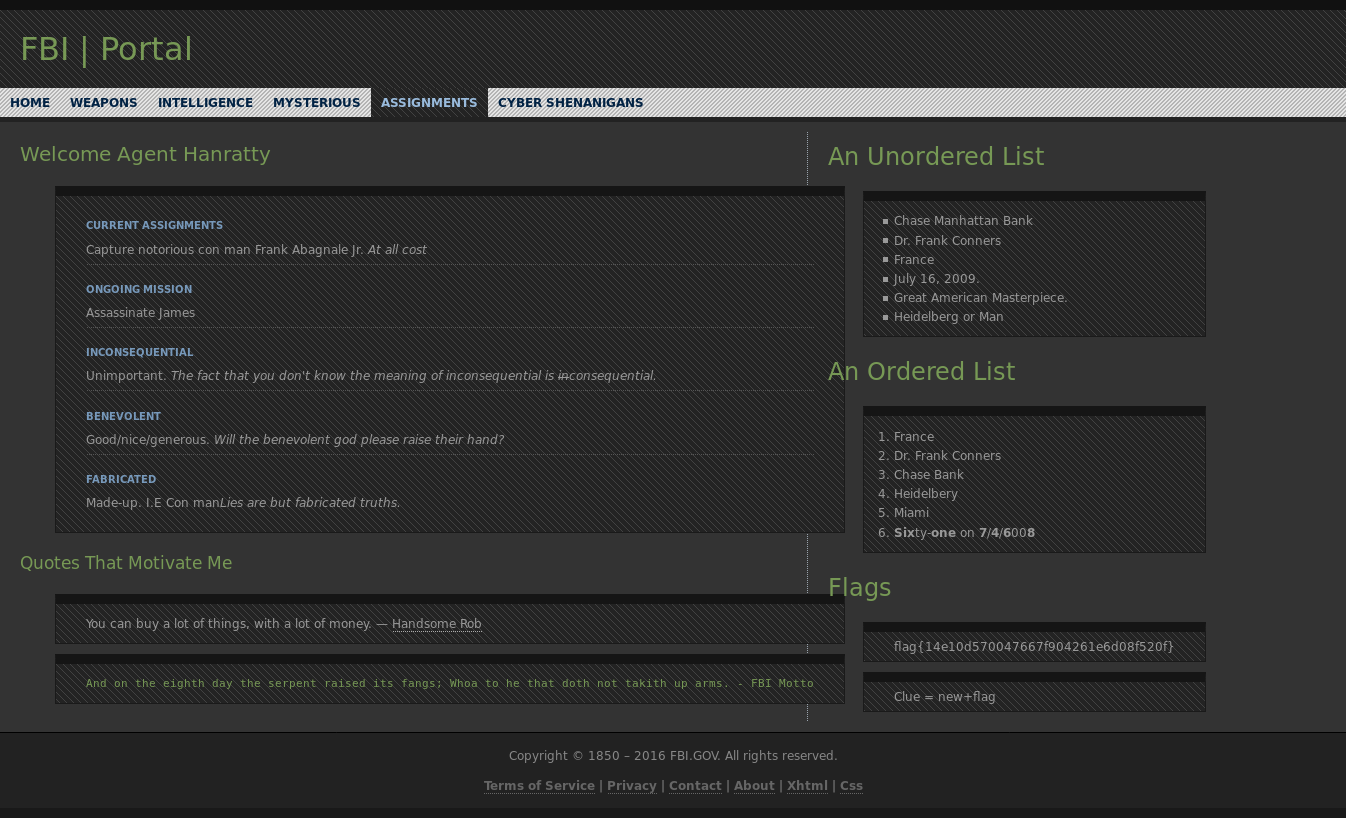 Flag #5 The Devil is in the Details – Or is it Dialogue? Either Way, if it’s Simple, Guessable, or Personal it Goes Against Best Practices

Following up on the clue new+flag, I tried navigating to 192.168.145.136/newevidence and a basic authentication prompt asked me for credentials. On the FBI portal we have the message “Welcome Agent Hanratty”. A quick Google reveals that this is a reference to agent Carl Hanratty from the movie Catch Me If You Can. I went through the dialogue (hint hint) on the IMDB page to find out Carl’s daughter is called Grace (simple? guessable? personal?). I tried some combinations in the pop up until I found the right one is carl.hanratty/Grace (remember the naming convention of doug.perterson)

Flag #6 Where in the World is Frank?

For this one you have to work with the other 2 files from the page, the image and the PDF invoice. The invoice mentions an encryption consultation project:

This might suggest the use of steganography in the image, and this is confirmed if you search for Stefan Hetzl, it turns out he’s the author of steghide! And we have the previous hint of panam, which is the passphrase in this case:

This was a movie reference and I had to look it up in other solutions…“I’m The Fastest Man Alive!” is a reference to The Flash, whose real name is Barry Allen. For the next part, log in to SSH with the the username barryallen and the password iheartbrenda.

And the hint for the last flag is theflash.

Flag #8 Franks Lost His Mind or Maybe it’s His Memory. He’s Locked Himself Inside the Building. Find the Code to Unlock the Door Before He Gets Himself Killed!

I transferred it to my machine with scp:

I unzipped the archive, but the file command didn’t identify it as something specific, it just said it’s data. I ran strings on it and saw various references to memory that seem to be linked to a Windows system. Time for some memory forensics with Volatility!

First, we need to identify what type of image we’re working with:

It’s an image of a Windows XP machine! Next, let’s look at the processes:

I took note of that Notepad process and several cmd.exes and then dumped the files:

I searched for the string code in the resulting list of files and got a hit:

Maybe this code.txt file is connected to the running Notepad process. I used Volatility’s notepad plugin to dump the text found into Notepad:

We have a hex string! Decoding it yields the final flag: flag{841dd3db29b0fbbd89c7b5be768cdc81}. And the decoded value for the last flag is Two[space]little[space]mice

This is it for the SkyDog Con CTF machine! I particularly liked the memory forensics part at the end!