By now you probably noticed that the last topics were centered more around Linux than the usual. That’s because I am studying for my LFCS certification, and creating posts as I go through the material. This time, we’re going to look at using virtualization on a Linux physical host. Since my only physical Linux at the moment is Kali, this is what I’m going to use for today’s post.

The first step before starting anything else, is to check if virtualization is enabled on your machine. For this, you can query your /proc/cpuinfo file and look for the following flags:

I already knew the result in my case, but I checked anyway with grep —color vmx /proc/cpuinfo:

Ok, the next step is to install the virtualization utilities:

KVM (Kernel Virtual Machine) is a full virtualization solution for Linux on x86 and x64 hardware containing virtualization extensions (Intel VT or AMD-V). It consists of a loadable kernel module, kvm.ko, that provides the core virtualization infrastructure and a processor specific module, kvm-intel.ko or kvm-amd.ko.

libvirt is an API toolkit for managing virtualization hosts

The virt-manager application is a graphical tool for managing virtual machines through libvirt. It primarily targets KVM VMs, but also manages Xen and LXC (linux containers).

virt-top is for monitoring VMs performance

After installing everything, you can go to /etc/libvirt/qemu/networks and look inside the default.xml file to see how the default virtual network will be configured:

Let’s see if the default network has been created. Don’t forget to start the libvirtd daemon first, with systemctl start libvirtd and then use virsh to list the defined networks. virsh is a powerful command line interface tool for managing guests and the hypervisor. It can also be used as an interactive prompt.

The default network is inactive, so we have to enable it:

Now, if you do an ifconfig, you should see the new bridge interface:

To get more info about your bridge, you can use the brctl command:

brctl is used to set up, maintain, and inspect the ethernet bridge configuration in the linux kernel.

An ethernet bridge is a device commonly used to connect different networks of ethernets together, so that these ethernets will appear as one ethernet to the participants.

Ok, now we have the default network set. It’s time to actually start some VMs. In KVM, VMs can be managed both from the command line with virsh, and from the GUI, with Virtual Network Manager, which you can find under System Tools.

Before starting to create VMs, please reboot your host to save you time and headaches.

I grabbed a Debian iso to showcase its live CD, and I created a VM from it: 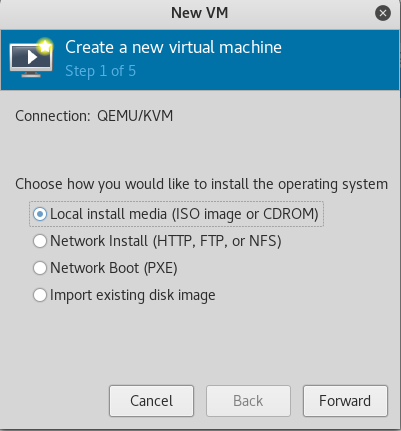 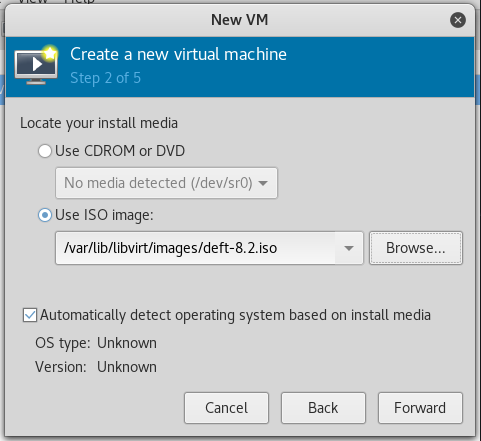 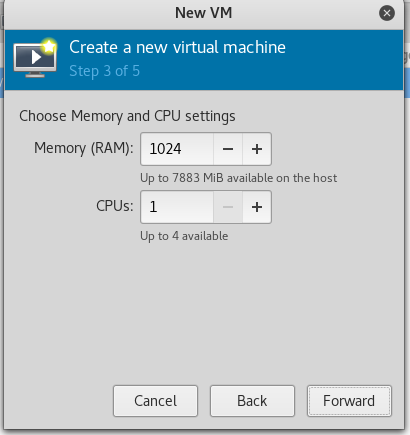 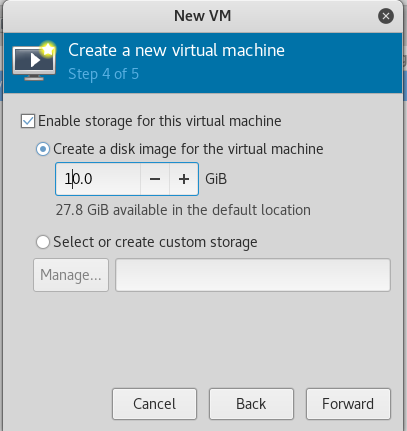 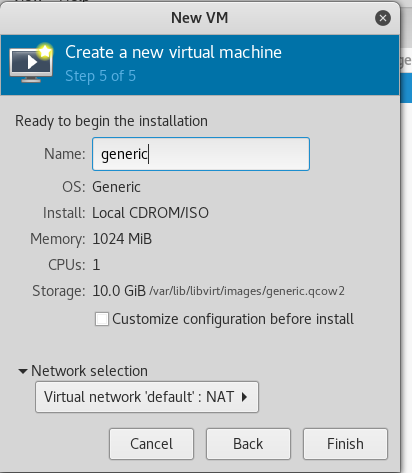 I had to do one more step before getting rid of errors every time I finished with the VM creation. libvirt was pointing to the qemu-kvm binary, but I had no such file, so I created a symlink as specified in this Arch Linux forum: 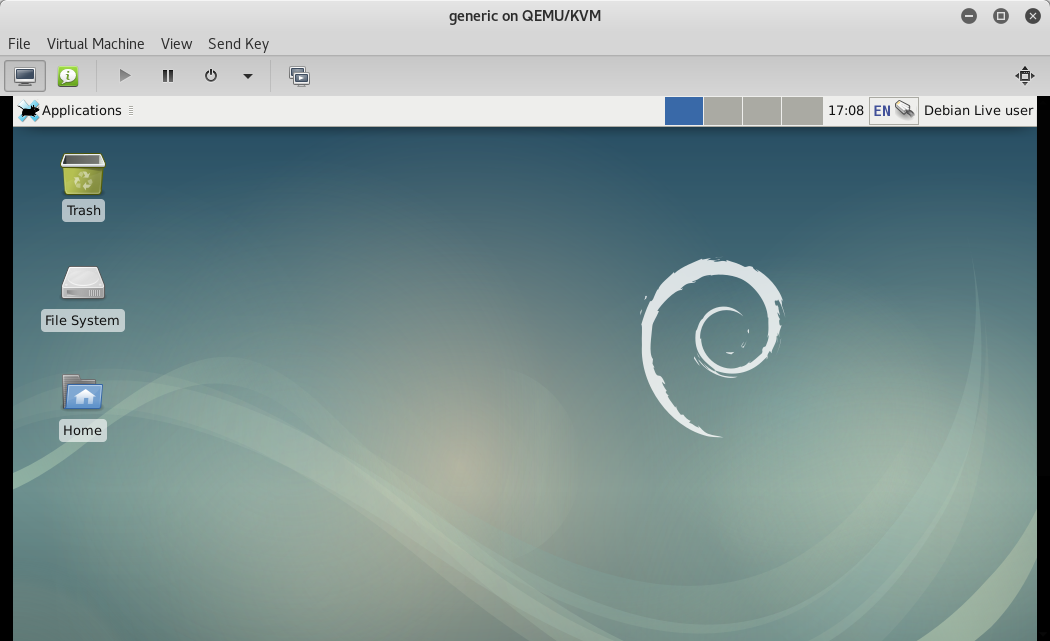 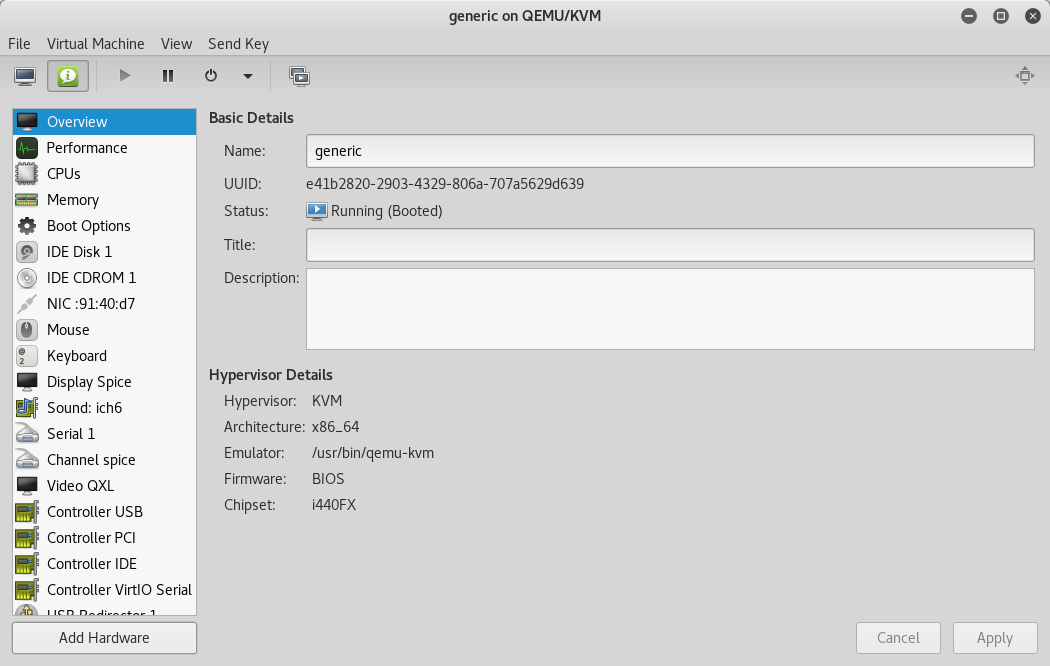 KVM graphical interface is nice, but we are not limited to a GUI. We can create and interact with VMs from the command line!

First, let’s see if what VMs we’ve got:

Now, I’m going to start a VM, which in virsh talk is called a domain, and look at some info about it:

Now we have a better grasp on Linux-based hypervisors, and we don’t have to rely on VMware and Virtualbox only. In a future post I will show how to install a VM from the command line.