Today I will walk through different ways of exploiting Metasploitable 2, the newer release of Rapid7’s popular vulnerable machine. First, what is Metasploitable?

Since this is a test lab, I won’t be concerned about stealth. Instead, I will try to get the most information out of the scans.

Let’s start by port scanning the target with nmap. I did a full port, aggresive scan against the target. Here are the results.

Ok, there are plenty of services just waiting for our attention. So let’s check each port and see what we get.

There is an exploit available in Metasploit for the vsftpd version.

The description from Rapid7 site:

This module exploits a malicious backdoor that was added to the VSFTPD download archive. This backdoor was introduced into the vsftpd-2.3.4.tar.gz archive between June 30th 2011 and July 1st 2011 according to the most recent information available. This backdoor was removed on July 3rd 2011.

Let’s leverage it and get a shell:

Aaand we own the machine! Now let’s move on.

The OpenSSL package installed on the system is vulnerable to a bruteforce exploit due to a random number generator weakness. Here’s the overview and the CVE number:

OpenSSL 0.9.8c-1 up to versions before 0.9.8g-9 on Debian-based operating systems uses a random number generator that generates predictable > numbers, which makes it easier for remote attackers to conduct brute force guessing attacks against cryptographic keys.

I chose the following Ruby exploit:

Before running it, you have to download the precalculated vulnerable keys from:

Then I ran the script as follows:

You can consult the source for more information, basically this checks if the root account has a weak SSH key, testing each key in the directory where you placed the keys. Upon a hit, you will see something like this:

After finding the key, you can use it to log in as root via ssh:

For this one I used an auxiliary module:

So now we know the credentials for the msfadmin account, and if you log in and play around you will find out that this accound has sudo privilege, so it’s possible to run commands as root.

Navigating to the root of the web server, we can see some vulnerable web applications, along with the msfadmin account details which we got earlier with telnet. I won’t go over the web applications here, because I am focusing on host based exploitation in this post. However, I found out that I could use Metasploit against one of them to get a shell, so I will detail that here.

The Nessus scan revealed that the TWiki web application is vulnerable to remote code execution. I found the following suitable exploit:

This module exploits a vulnerability in the history component of TWiki. By passing a ‘rev’ parameter containing shell metacharacters to the TWikiUsers script, an attacker can execute arbitrary OS commands.

This is a low privilege shell, but we can escalate to root via the udev exploit, as shown later.

First, I’ll use an auxiliary module to get the server’s version:

With that information in hand, we can now use a suitable exploit against the target:

This module exploits a command execution vulerability in Samba versions 3.0.20 through 3.0.25rc3 when using the non-default “username map script” configuration option. By specifying a username containing shell meta characters, attackers can execute arbitrary commands. No authentication is needed to exploit this vulnerability since this option is used to map usernames prior to authentication!

The nmap scan revealed the port is open but it’s tcpwrapped. Let’s first see what that means:

So we can conclude the port is protected by TCP Wrapper. If we try to netcat to the port, we see this:

I ran a Nessus scan against the target, and according to the report, a critical vulnerability is present on this port:

Using common usernames as well as the usernames reported by ‘finger’, Nessus was able to log in through rsh. Either the accounts are not protected by passwords or the ~/.rhosts files are not configured properly.

This vulnerability is confirmed to exist in Cisco Prime LAN Management Solution, but could be present on any host that is not securely configured.

So all we have to do is log in via the remote shell program:

Let’s continue our exploitation. Anything labeled Java is bound to be interesting from a security perspective :)

This module takes advantage of the default configuration of the RMI Registry and RMI Activation services, which allow loading classes from any remote (HTTP) URL. As it invokes a method in the RMI Distributed Garbage Collector which is available via every RMI endpoint, it can be used against both rmiregistry and rmid, and against most other (custom) RMI endpoints as well. Note that it does not work against Java Management Extension (JMX) ports since those do not support remote class loading, unless another RMI endpoint is active in the same Java process. RMI method calls do not support or require any sort of authentication.

Well, not much to say here. There’s already a nice, cozy shell waiting for connections, so nothing extra needs to be done.

Let’s use the the showmount command to see the NFS server’s export list. This command displays mount information for an NFS server. The -e flag is for showing exports:

How nice! The root directory is shared. So, let’s mount it then:

Now we can read the passwords and everything else:

The Nessus scan that I ran against the target revealed the following:

The remote database server can be accessed without a password.

It is possible to connect to the remote MySQL database server using an unpassworded account. This may allow an attacker to launch further attacks against the database.

Let’s see if we can indeed connect to the database as root without a password:

Now we can look inside the databases and get any data that might interest us.

distccd is the server for the distcc distributed compiler. It accepts and runs compilation jobs for network clients. Metasploit has an exploit avaiable for this:

This module uses a documented security weakness to execute arbitrary commands on any system running distccd.

So we have a low privilege account. Time for some local privilege escalation. I will use this exploit: http://www.exploit-db.com/exploits/8572/

Pass the PID of the udevd netlink socket (listed in /proc/net/netlink, usually is the udevd PID minus 1) as argv[1].

The exploit will execute /tmp/run as root so throw whatever payload you want in there.

Ok, on the command line on the victim, I looked for netcat and fortunately, it’s installed:

So I will compile the exploit and send it over netcat. I am on a 64 bit Kali and the target is 32 bit, so I compile it explicitly for 32 bit:

From the victim, I go to the /tmp/ directory and grab the exploit from the attacking machine:

Next, let’s look for the PID:

And the relevant line is:

Check that this is the correct PID by looking at the udev service:

Next, put some payload in /tmp/run, since that will be executed by the exploit. I will use netcat to connect to the atacker machine and give it a shell:

On the attacker machine, listen on port 5555:

And on the victim machine, now that all is set up, I just make the exploit executable and run it:

Now check our local netcat listener for the root shell:

A bit on effort on that one, but all the more rewarding! Let’s move on.

Since I already saw earlier that the mysql database wasn’t password protected, I will try a bruteforce auxiliary module to see if I can get in this one.

This module attempts to authenticate against a PostgreSQL instance using username and password combinations indicated by the USER_FILE, PASS_FILE, and USERPASS_FILE options.

So it’s possible to log in to this database like earlier with mysql, but I searched through Metasploit’s available exploits, and I stumbled upon one that can further the exploitation:

On some default Linux installations of PostgreSQL, the postgres service account may write to the /tmp directory, and may source UDF Shared Libraries’s om there as well, allowing execution of arbitrary code. This module compiles a Linux shared object file, uploads it to the target host via the UPDATE pg_largeobject method of binary injection, and creates a UDF (user defined function) from that shared object. Because the payload is run as the shared object’s constructor, it does not need to conform to specific Postgres API versions.

From here we again have to elevate our privileges. I will exploit the same vulnerability with the udev exploit, but this time from inside Metasploit:

So, the same exploit that I manually used earlier was very easy and quick in Metasploit. Onwards!

The Nessus scan reported that the server is using the password ‘password’. So I will use vncviewer to connect to it: 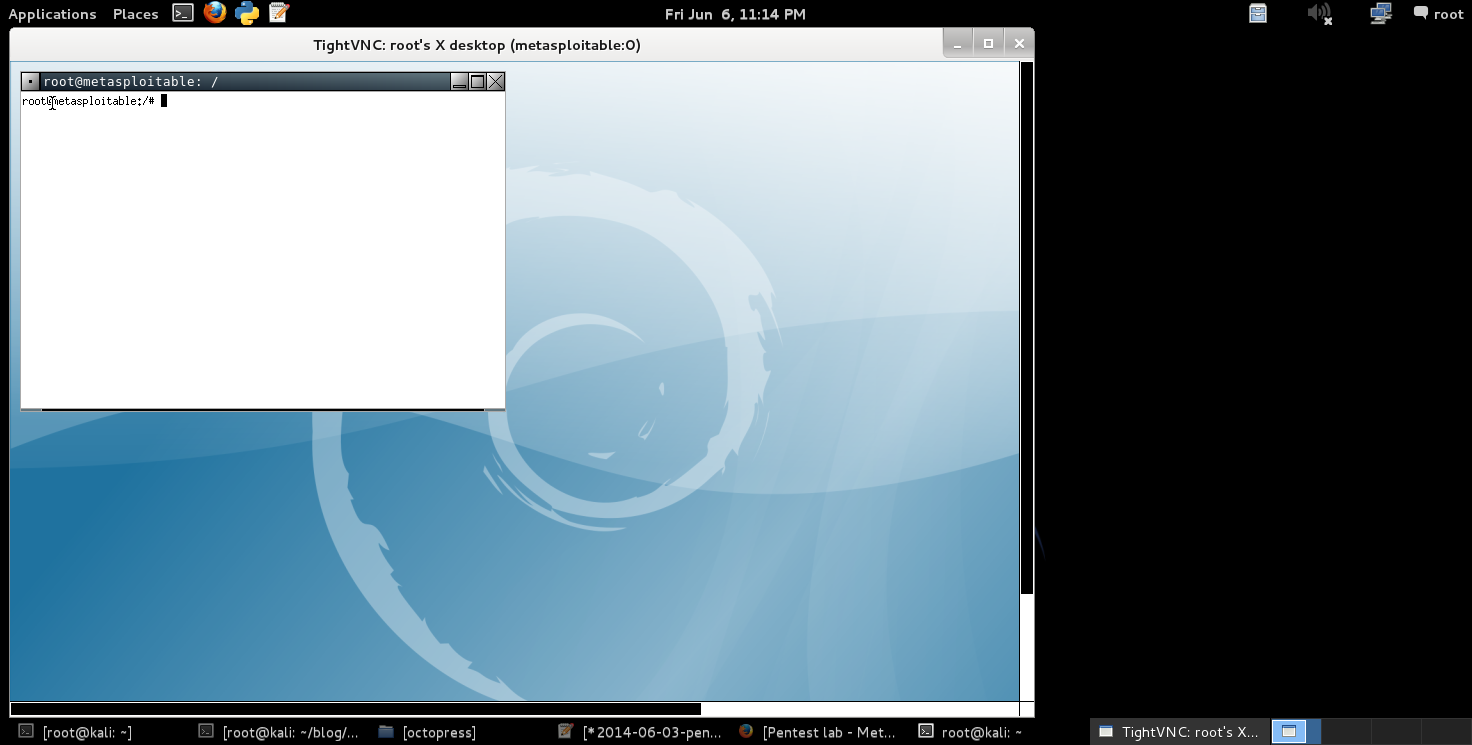 And we have another root shell.

An exploit is available for this:

This module exploits a malicious backdoor that was added to the Unreal IRCD 3.2.8.1 download archive. This backdoor was present in the Unreal3.2.8.1.tar.gz archive between November 2009 and June 12th 2010.

First, let’s see what information we can get using the Tomcat Administration Tool Default Access module:

With credentials in hand, now we can use the Apache Tomcat Manager Application Deployer Authenticated Code Execution exploit:

This module can be used to execute a payload on Apache Tomcat servers that have an exposed “manager” application. The payload is uploaded as a WAR archive containing a jsp application using a PUT request. The manager application can also be abused using /manager/html/upload, but that method is not implemented in > this module. NOTE: The compatible payload sets vary based on the selected target. For example, you must select the Windows target to use native Windows payloads.

We can elevate our privileges using the udev exploit from earlier, so I won’t go over it again.

First I wanted to know what this drb is, since I wasn’t familiar with it.

Distributed Ruby or DRb allows Ruby programs to communicate with each other on the same machine or over a network. DRb uses remote method invocation (RMI) to pass commands and data between processes (Wikipedia)

Then I searched in Metasploit for an exploit, and luckily, I got a hit:

Another port, another shell!

This turned out to be a a very lengthy post. There were some ports I couldn’t find an exploit for, so can’t determine if the underlying services were exploitable or not. Overall, owning Metasploitable in multiple ways and documenting it was the goal of this post.

You will be a winner today. Pick a fight with a four-year-old.